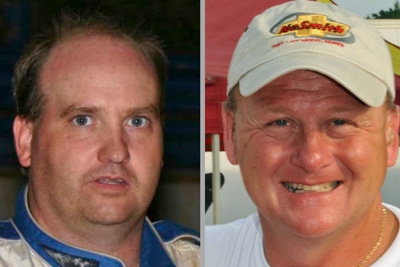 Dan Breuer (left) and David Gentry (right) are battling for the NeSmith crown.

Dan Breuer and David Gentry have ramped up the excitement in the battle for the $20,000 NeSmith Chevrolet Dirt Late Model Series Championship. They are tied for the points lead with four events left on the 2011 schedule and are also tied for the Hedman Husler of the Year Award.

In his first full season of NeSmith Chevrolet Dirt Late Model Series competition, Breuer of Troutman, N.C., and is looking take his place in the history of the series by becoming the fifth different champion in the seven-year history of the tour for Crate Late Models. Gentry of Murfreesboro, Tenn., is a two-time series champion looking to build on a legacy that’s made him the leader of several different series statistics.

Breuer and Gentry have held the first two spots respectively in the tour’s standings since the fourth race of the season on April 2 at Smoky Mountain Speedway in Maryville, Tenn. Breuer has two victories this season with the first coming at Greenville (Miss.) Speedway on April 9, and the second at Senoia (Ga.) Raceway on May 21.

In addition to being the first two-time winner this season, Breuer recorded 11 straight top-10 finishes in the first 11 races of the season. Going into the 12th race of the season at Greenville on Oct. 7, Breuer held his biggest point lead of the season over Gentry with a 36 markers separating the two drivers.ï¿½ There were high expectations for Breuer in returning to the site of his first win this season.

It turned out to be Breuer’s worst night of the season. He failed to qualify for the main through qualifying, heat race or consolation race. The point leader had to take a provisional starting spot and lined up 23rd to start the feature. Things didn’t get much better from there for Breuer, who was disqualified on lap 26 after spinning for the second time. The tour has a two-caution rule, where drivers causing two caution periods are forced to retire from the event. It resulted a disappointing 19th-place finish.

“We brought a new car to Greenville and put the setup we had in April on it,” Breuer said.ï¿½ “For whatever reason, it just wouldn’t work in the Friday night race, but my AES Racing crew kept working on it, and by the feature race on Saturday night, it started working a lot better.”

Gentry also had an uphill climb at Greenville. While running in the top 10, Gentry was charged with causing a caution on lap seven. But he rallied from the back of the field during the remainder of the 40-lap race to finish sixth. Going into the Oct. 8 event at Greenville, Gentry had trimmed Breuer’s point lead to just 10 points.

Both drivers had better nights at this time around, but it was Gentry making up the 10-point deficit with his a dominating victory, his first since 2007. Breuer started 13th and finished fifth to keep a share of the point lead.

Breuer and Gentry share the point lead at 1,160 points going into the tour’s next event at Nov. 4-5, which will appropriately be right back at Greenville Speedway for the $3,000-to-win fifth annual Gumbo Nationals. It’s going to be the most anticipated race of the season, as both drivers have enjoyed their best nights of the season on the high-banked, gumbo quarter-mile.

Breuer and Gentry have had to work and drive hard for their share of the point lead, and also find themselves tied for the lead of the Hedman Husler Hard Charger point standings with 58 points. At each touring series event, a driver earns one point for each position they improve from the start of the race to the end of the race.

At the end of the season, Hedman Husler Hedders, the Official Hedder of the NeSmith Chevrolet Dirt Late Model Series, will award the driver with most Hedman Husler points a $1,000 check as the Hedman Husler of the Year.

The tale of the statistical tape has Breuer with two wins, nine top-five finishes, 12 top-10 finishes and $14,150 in season earnings in the first 13 events of the season.

Gentry has one win, seven top fives and, like Breuer, 12 top-five finishes. Gentry’s only finish outside the top 10 was an 11th-place effort in the third race of the year at East Bay Raceway Park near Tampa, Fla., in February. Gentry has earned $10,050 so far this season. Gentry is also the only driver this season to complete all 650 laps of competition.

“We haven’t won as many races as we would have liked to at this point of the season,” Gentry said, “but we’re finishing all of the races.”

Gentry knows about winning championship and races on the NeSmith Series. Gentry won the series title in 2006 and 2007 and is the all-time career earnings leader in seven-year history of the series, pocketing $126,445 to date in prize and point fund money.

The $20,000 championship battle will come down to the final four races of the season which along with the return to Greenville include a doubleheader weekend at Whynot (Miss.) Motorsports Park and Columbus (Miss.) Speedway Nov 19-20 and the series finale in the $10,000-to-win seventh annual World Championship Race at East Bay on Dec. 2-3.

So who has the advantage heading into the tour’s stretch run? In at all estimates, it’s virtually a deadlock, with the two drivers tied in nearly every statistical category for the season.

The only difference is Breuer’s advantage in the win column with two to Gentry’s one. With the tour’s tiebreaker going to the driver with more victories, the championship could come down to that.

If Las Vegas set a betting line for Breuer vs. Gentry in the contest for the 2011 NeSmith Series title, it would likely say pick ‘em.