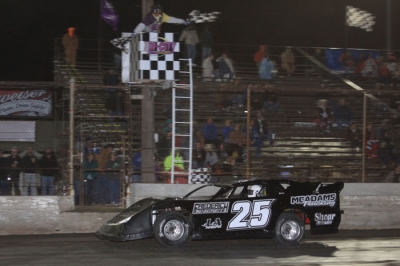 Lance took the checkers in the season-ending event ahead of Nick Lyons of Centralia, Ill., who wrapped up the championship on the first-year series for Crate Late Models.

Salter and Jason Zobrist of Highland, Ill., started on the front row at the 3/8-mile oval and battled for the lead several laps before Salter took command on the eighth lap. Lance took up the chase and slid past Salter to take the lead on the 18th lap, leading the rest of the way of the caution-free feature.

Lyons earned $2,500 of his championship, which was confirmed on Sunday when series officials inspected his crate engine to assure it was legal.