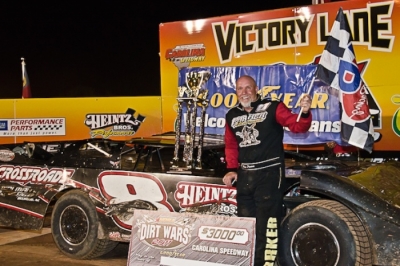 Ron Parker put an exclamation point on the 2011 National Dirt Racing Association season by sweeping the Dirt Wars presented by Goodyear Racing Tires main events over the weekend. The Belwood, N.C., veteran led all 80 laps contested between the tour’s events at Carolina Speedway in Gastonia, N.C., Friday night and at Lancaster Speedway Saturday night to collect a total of $6,000 on the weekend. | Slideshow

The two victories weren’t the only highlights of Parker’s weekend. The wins also allowed him to wrap up the Heintz Performance Road Show championship as well as the City Chevrolet League Championship Series title.

Parker started from the front row of Friday’s 40-lap main event at Carolina Speedway and grabbed the lead over Steve Banal of Troutman, N.C., on the first lap. Parker kept Banal at bay the entire distance while leading every lap to score the victory.

Banal kept Parker within striking distance but the Pennsylvania transplant had to settle for a second-place finish and the $2,000 runner-up prize. Dennis Rambo Franklin took third with Matt Stover and Anthony Sanders rounding out the top five.

Saturday night’s event at Lancaster Speedway was more of the same, as Parker once again led every lap over Banal to score the victory. Banal again stayed within a few car lengths of Parker, but settled for his second consecutive runner-up finish.