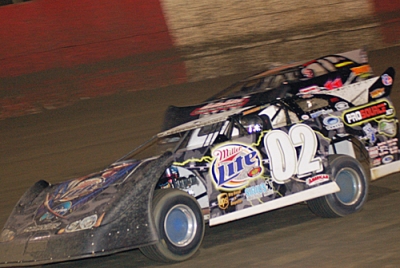 GIBSONTON, Fla. (Feb. 22) — Winning a side-by-side duel with Doug Horton in the late stages of the 40-lapper, Keith Nosbisch of Valrico, Fla., led the final 10 laps at East Bay Raceway Park for a $2,500 victory on the NeSmith Chevrolet Dirt Late Model Series tour. “That was an exciting race, as I would catch Doug in lapped traffic and get the inside line, and then he would come back and do the same to me,” Nosbisch said.

Horton, of Bruceton Mills, W.Va., settled for second after leading laps 16 through 30 while Larry Boutwell of Baker, Fla., Ryan Mitchell of Lithia, Fla., and Tony Payne of Riverview, Fla., gave home-state drivers four of the top five spots. Fast qualifier and polesitter Jack Nosbisch Jr., led the first 15 laps but handed the point to Horton when he spun in turn two. Because of Thursday's rainout, Saturday's program will be made up of two complete shows for the crate Late Models.