Polesitting T-Mac goes for two in row at East Bay 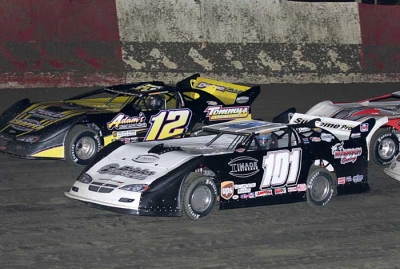 The 2010 East Bay champion Bryan Bernhardt of Clearwater, Fla., won the third heat race and will start the big show from inside row two. Jeff Smith of Chatsworth, Ga., starts the main event from the outside of the second row after winning the fourth heat.

The top four finishers in each heat race earned a starting spot in the big show. Jack Nosbisch Jr. of Riverview, Fla., Travis Varnadore of Valrico, Fla., and Hall of Fame driver Ronnie Johnson of Chattanooga, Tenn., finished second through fourth in the first heat.

Joining Davenport in transferring to the main event out of the second heat race were Doug Horton of Bruceton Mills, W.Va., Jeff Mathews of Dover, Fla., and Rodney Wing of Meridian, Miss.

Second through fourth in the third heat were Dennis Franklin of Gaffney, S.C., Phillip Cobb of Riverview, Fla., and Doug Watson of Lithia, Fla.

Drivers finishing fifth through 11th in their respective heat races on Friday night will have another opportunity to make the 24-car starting field through one of two 20-lap consolation races on Saturday night. The top three finishers in each consolation race will fill in starting positions 17 through 22.