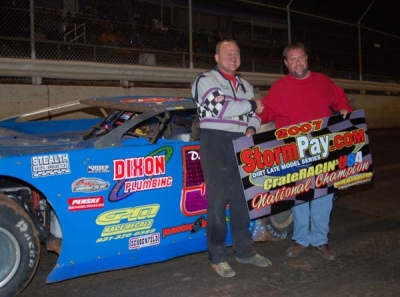 COLUMBUS, Miss. (Dec. 1) — Derrick Rainey of Powder Springs, Ga., was untouchable in posting a flag-to-flag victory in the 40-lap StormPay.com Dirt Late Model Series portion of the Possum Town Grand Prix at Columbus Speedway while David Gentry of Lewisburg, Tenn., came from behind to repeat the series championship.

Gentry and Jay Blair of Angie, La., battled back and forth all night long for the title, but it was Gentry overcoming adversity after starting 23rd and finishing seventh to earn a championship worth $20,000.

Rainey set fast time among the 42 entrants with a lap around the third-mile high-banked clay oval in 14.670 seconds to earn the pole position. Rainey led from the drop of the green flag, and was never challenged in the 40-lap race to pick up his second win of the season.

“We just had an awesome car all night long, and we had a good season,” Rainey said. “We were in the championship hunt right up to the end, and we’re happy to end up with a solid third-place finish in the point standings.”

While Rainey had everything going his way up front, most of the attention in the race centered around Gentry and Blair.

Blair started third and was looking for his third victory of the season at Columbus Speedway. Coming into the night, Blair trailed Gentry in the point standings by 34 points. If Blair won the race, Gentry had to finish 16th or better to win the championship.

Gentry had a bad qualifying run and timed in 29th, which put him starting seventh in the first of three 12-lap consolation races where the top four finishers transferred to the main event. Gentry finished sixth in his consolation and had to take a provisional for the feature, starting 23rd.

When the race started with Blair third and Gentry 23rd, Blair held a six-point lead over Gentry when the green flag fell. Gentry wasted no time doing what he had to do to win the title. By lap four, Gentry charged up to the 16th spot, and with Blair running second, held a six-point lead. Gentry kept moving forward, and finished seventh, while Blair went under the checkered flag in the fourth spot. Gentry won the title by 28 points.

“I was really concerned because I know that Blair runs well here," Gentry said. "We made some changes trying to get the push out of the car, and it worked. We had a great car for the main event, and I just kept counting the cars as we moved through the field.”

Gentry’s championship charge from 23rd to seventh earned him the NeSmith Chevrolet Hard Charger of the Race Award.

Chip Brindle of Chatsworth, Ga., capped off his rookie of the year season with a second-place finish while Chris Tays of Corinth, Miss., had his best run of the season after starting 14th and finishing third. Following Blair in the fifth spot was Frankie Beard of Hartwell, Ga., after starting 17th.

Rainey's Warrior Race Car is sponsored by Hays Racing and Barto Enterprises. ... Fourteen drivers completed 40 laps. ... Rainey was the fast qualifier with a 14.670-second lap. ... The season finale was rained out the previous Saturday. ... Mike Boland of Cuba, Ala., won $5,000 in the Super Late Model portion of the Possum Town Grand Prix. ... Steve Godsey won StormPay.com's Race of Regions and Keith Freeman won the Race of Champions. ... David Gentry's championship came with 1,818 points as he topped Jay Blair (1,790) and Rainey (1,772). ... World of Outlaws Late Model Series regular Clint Smith of Senoia, Ga., piloted the LSK Enterprises GRT and finished eighth. ... Series competitors head to Tampa, Fla., for the postseason banquet on Wednesday night in the Cigar City at the Embassy Suites Hotel. On Friday and Saturday, the third annual World Championship for crate Late Models at East Bay Raceway Park in Gibsonton, Fla., pays $10,000 to the winner of the 100-lap feature.