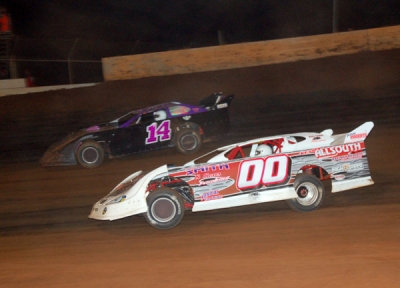 The race featured the top drivers from the 17 StormPay.com Weekly Racing Series sanctioned track across the country.

Godsey and Smith swapped the lead officially at the start finish line twice, but they traded the position countless times around the third-mile high-banked clay oval. Godsey led the first 16 laps of the race before Smith took over running the inside line. Godsey stuck to his gameplan, stayed on the high side, and made the winning pass with five laps to go.

“During the preliminary races, the car felt good on the bottom of the track, but Joey and Jeff Fields told me to stay up high in the main event,” said Godsey, who piloted a Rayburn Race Car for Fields Racing of Aragon, Ga. “I thought I lost the race when Jeff Smith got by me on the inside, but I stayed with game plan and it came back to me at the end of the race.”

Godsey is a big fan of Columbus. “I’ve been here four times, and I just love this place because it’s a fast bullring. I just wish this place was right in my backyard in Indiana.”