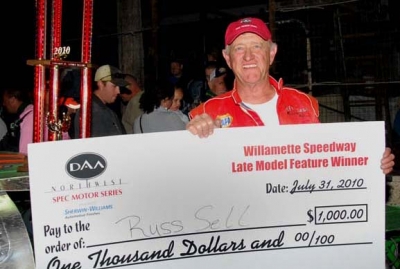 LEBANON, Ore. (July 31) — Coming off a big victory a week earlier, Russ Sell of Brownsville, Ore., followed it up with another Willamette Speedway victory on the DAA Northwest Crate Late Model Series. Sell, who started outside the front row, led the final 40 laps for his second victory on the first-year Crate Late Model series. | Slideshow

Hometown driver Jason Wines, who led the early stages of the race, faded to a ninth-place finish.

Series points leader Greg Walters of Banks, Ore., brought out the fifth caution when he got into the infield tire barriers and was listed 10th in the final rundown.

The most serious among the race stoppages came when the red flag appeared after Brittany Ray and Brett McCutcheon tangled on the backstretch. Ray’s car suffered heavy damage after backing into the concrete-filled tire barriers.

Next up for DAA Northwest drivers is an Aug. 7 event at Sunset Speedway Park in Banks, Ore. The second annual Doug Walters Memorial 67-lap T&G Thriller pays $2,000 to the winner.