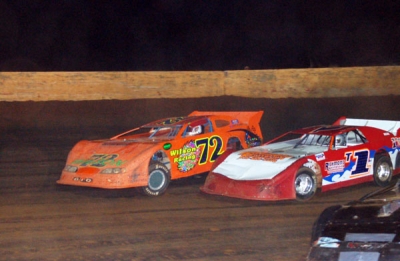 It's fitting that Frank Wilson's has a saw blade adorning the side of his orange No. 72 crate engine Dirt Late Model. The Milton, Fla., driver cut through the StormPay.com Weekly Racing Series South Region competition like the buzzsaw en route the the championship as he piled up seven victories and 18 top-five finishes.

Wilson was the ironman of StormPay.com's weekly division in 2007, competing in a series-leading 42 events at four different tracks. Wilson had three victories in 22 starts at Blackman (Fla.) Motor Speedway and two victories in 12 starts at Southern Raceway in Milton. Wilson was the StormPay.com Weekly Racing Series Track Champion at both tracks. Also on Wilson’s 2007 resume were one victory in five starts at Butler County Motorsports Park in Greenville, Ala., and one victory at Deep South Speedway in Loxley, Ala., where he had three starts.

By winning the South Region, Wilson will receive a cash award, a new GM Performance 604 Crate Engine, and a new TNT Chassis at the season-ending banquet in Tampa, Fla., on Dec. 5.

“This is by far the best season I’ve ever had in racing, and the first time I’ve actually made a little money doing it,” Wilson said, who plans on following the StormPay.com tour next season. “I’m already preparing for the 2008 season with a new race car and a new hauler."

The second annual Crate Racin’ USA Fall Nationals Invitational Race is scheduled for Friday with time trials, heat races and a 40-lap main event. The Race of Regions and Race of Champions heat races will be contested on Friday afternoon, with the feature races held on Saturday afternoon prior to the StormPay.com Dirt Late Model Series touring event.