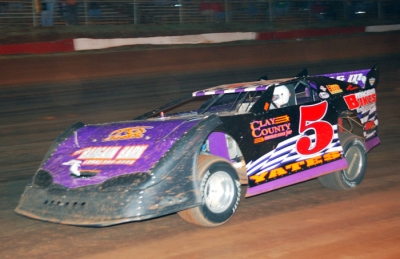 Gaither, who set fast time among the 63 entrants, jumped to the lead at the outset and used the low groove to hold off competitors for more than 20 laps.

Yates, who jumped into the high groove midway through the race, took the second spot from Blair and then overtook Gaither on the 21st lap en route to a $1,500 victory.

Yates became the 11th winner in 11 races on the 2007 Top Tracks tour. ... Jake Knowles of Tyrone, Ga., who finished 14th in the feature, was crowned the 2007 series champion. The top six drivers in series points were recognized on the frontstretch following the race. ... Bob Gibby won the crate engine giveaway among drivers who attended every 2007 series event. ... The postrace ceremonies included Debra Swims and Chase swims, the wife and son of late promoter Mike Swims, who served as a consultant for the series. ... Among drivers failing to make the feature field: Mike Head, Frankie Beard, Dee Hindman, Lamary Haygood, Dewayne Aldridge, Keith Freeman, Robert Stutts and Parrish Duncan. ... Information will be announced about the postseason banquet for the crate series.