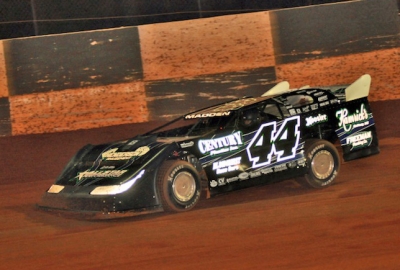 Saturday's unsanctioned 100-lapper is the richest Crate Late Model event nationally, paying $25,000 to the winner and at least $1,000 to every starter.

Other heat race winners were Tom Maddox of Piedmont, Ala.; Jonathan Davenport of Blairsville, Ga.; Ronnie Johnson of Chattanooga, Tenn.; Steven Roberts of Sylvester, Ga.; and Elbert McCullough of Cedar Bluff, Ala.

Notes: Saturday's forecasts are for clear skies with highs in the mid-60s. ... Grandstand admission is $20 for adults, $10 for ages 5-16 and free for children 4 and under. ... The fastest qualifiers in each qualifying group were Anthony Sanders, Chris Madden, Eric Cooley, Justin McRee, Jonathan Davenport and Ronnie Johnson; each started fourth in heat races. ... Randy Weaver was running in a transfer spot in his heat race but fell out, boosting last year's winner Shanon Buckingham into a transfer position.

Editor's note: Because of technical issues, video was only available from the first four heat races.