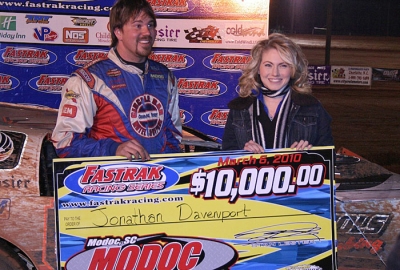 MODOC, S.C. (March 6) — Fourth-starting Jonathan Davenport of Blairsville, Ga., went around Larry Blankenship of Mooresville, N.C., on the 19th lap Saturday night at Modoc Speedway and dominated the rest of the way for his second consecutive Modoc 100 victory. Davenport earned $10,000 at the Fastrak Southeast event for Crate Late Models that drew a large crowd to the 4/10-mile oval. | Slideshow

Royce Bray of Hull Ga., who started fifth, finished 10 seconds behind in the runner-up spot with 10th-starting Lee Cooper of Greer, S.C., heading forward at the finish to finish third. Brandon Overton of Appling, Ga., and Chris Steele of York, S.C., rounded out the top five.

Travis Blackwell of Lyman, S.C., ran in the top five the first half of the race, but he gave up the third spot at the halfway point with a broken left-front A-frame after limping to the midway break.

Blankenship faded to an 11th-place finish, the last driver still running at the finish in the 24-car field.

The most serious accident among several cautions came on the 28th lap when Kenny Peeples Jr.'s car flipped after contact with Timbo Mangum. Peeples wasn't injured but the red flag was displayed during the lengthy cleanup.

Notes: Davenport drove a Barry Wright Race Car. ... Davenports also earned $500 from City Chevrolet for his fast qualifying time. ... Fifteen cars were running at the halfway break. ... Next up for Fastrak Southeast is a $3,000-to-win event April 3 at Lavonia (Ga.) Speedway.