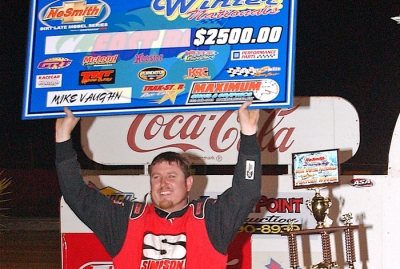 Smith started 10th but was up to third after just one lap and moved past Weaver to take second by lap three.

“I’ve got a lot of laps around this place, and I’ve got a setup that works good when the track rubbers up,” Smith said. “I knew I had to get to the front early, and we were able to use the track conditions to our advantage.”

Henderson started on the pole for the second straight night, but Smith was already stalking him in the early laps of a race slowed by three cautions. As the leaders approached traffic on the 20th lap, Smith and Weaver got by Henderson on lap 22, and the race's final yellow bunched the field on lap 24.

Smith build a six-length lead 10 laps later, but Weaver tightened up on him amid slower cars with 12 laps remaining. Smith cleared the traffic and edged away over the final 10 laps.

Notes: Smith's TNT Race Car is sponsored by Seckman Fire Sprinklers and Gardner Racing. ... The winner's first name is pronounced like the name Shawn. ... David Pollen's car caught fire for a lap-14 caution; the fire was extinguished by the track safety crew and Pollen was uninjured. ... William Thomas of Phenix City, Ala., earned GM Performance Parts Hard Charger honors for his 18th-to-eighth run. ... Fifteen of 24 starters completed 50 laps. ... Nineteen were running at the finish. ... The series closes a three-race run at East Bay on Saturday night with a 50-lap, $3,000-to-win main event.