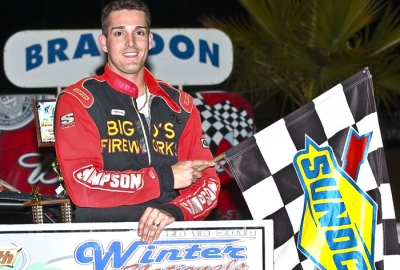 GIBSONTON, Fla. (Feb. 18) — Making the most of his guest appearance in a borrowed car, Devin Dixon of Apollo Beach, Fla., rode the high line to victory in Thursday's 50-lap main event for the NeSmith Chevrolet Dirt Late Model Series at East Bay Raceway Park. Dixon used the outside groove to overtake race-long leader Doug Horton of Bruceton Mills, W.Va., on the 44th lap at the third-mile oval. | Slideshow

Horton was the apparent second-place finisher in the event for crate engine Late Models, but he was disqualified after failing the postrace technical inspection with an unauthorized muffler.

Randy Weaver of Crossville, Tenn., was moved up to second and Dixon’s teammate, Jeff Mathews of Dover, Fla., was third in the event at the 34th East Bay Winternationals.

“The track kept changing throughout the race, and it seemed to come to us the longer the race went,” Dixon said. “I’ve got to thank Jeff Mathews and his crew for giving me an opportunity to drive this car this week.”

Provisional starter Matthew Turner of Dawsonville, Ga., rallied from 23rd to finish fourth and Bryan Bernhardt of Clearwater, Fla., rounded out the top five. Polesitter Charlie Henderson of Cottondale, Ala., finished 12th and Justin McRee of Cuba, Ala., spun out of a top-five spot in the final 10 laps.

Dixon's winning move came after the race's sixth and final caution on lap 43. Dixon jumped to the outside groove when the green flag reappeared and the lead pair raced side-by-side until Dixon took the lead in turn three on lap 44. Mathews, Weaver and Turner raced three-wide in the final laps to contest what would be the runner-up spot. Dixon pulled away from Horton with Weaver, Matthews and Turner bunched behind them.