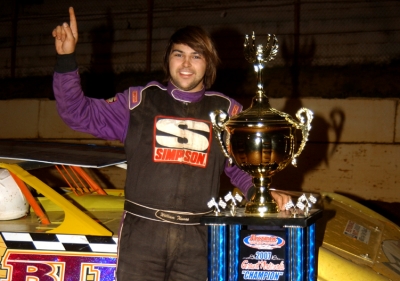 That was 20-year-old William Thomas of Phenix City, Ala., who never finished worse than fourth in all three rounds of Grand Nationals action to win the Fastrak national championship. He won the opener at Green Valley Speedway in Glencoe, Ala. and finished third two days earlier at Mountain Raceway Park in Maryville, Tenn., before his title-clinching fourth-place run at Volunteer.

"Man, to win this Fastrak Racing Series national championship is unreal," said the smiling Thomas following the race after getting back to his pit area. "Consistency is what won it forï¿½us, because you don't necessarily have to win all three national championship races in order to win the title. We were fortunate enough to win the first race, then just recorded top-five runs in the next two races and that’s what enabled us to win this $50,000 payout.

"I don’t guess it’s really hit me yet that I’ve just won a national racing championship, and especially with the field of drivers assembled here … it was definitely tough. Winning this title is something that I’ll never forget the rest of my life. Who knows, I might never win another national championship again in racing. But winning this championship is the accomplishment of one of my goals in motorsports, and hopefully I can parlay it into even bigger things down the road.

"With my family owning East Alabama Motor Speedway, of course I’m kind of partial to our track. But from the first time I came here to Volunteer Speedway to race, I really liked this place. My dad and my uncle, they both raced here back many years ago in the National Dirt Racing Association days and they also liked racing here."

In the main event, Bobby Mays and Lee Cooper led the 24-car field to the green. But a caution waved before a lap could be completed when Cooper had a tire go down between turns three and four, resulting in him spinning in front of the entire field forcing everyone into evasive maneuvers to avoid contact. Following quick tire change, Cooper rejoined the field on the tail.

With Peeples moving up to the outside of Mays on the front row, they raced side-by-side down the front straightaway into the first turn. But carrying the momentum off the high-side, Poples powered into a lead he would never relinquish, with Mays running second followed by Allen Champ, John Llewellyn and Mountain Raceway Park winner Buckingham as the field completed the opening lap.

"I've never really ran very well here at Volunteer Speedway, but we put something under the car following practice last night and set third fastest time in qualifying," Peeples said after climbing from his car on the front straightaway. "Something I've learned over the years in racing is sometimes it's good to have a little bit of luck on your side, and we kind of caught a lucky break there on the start when (Cooper) had a tire go down, moving us up to the outside of row one for the start. My car worked very good up high in the banking, and there on the start I was just able to get a strong run up top off the corner to get past Mays for the lead.

"I was really glad once we got past the halfway point in the race, because I sure don't like those double-file restarts. Those things can get you in trouble quickly. But our car was so good, I could just get back into the lead quite easily. There in the midpoint of the race, I kind of had a couple anxious moments with some of the slower cars when I was lapping them. I could look up at the scoreboard as we raced down the front straightaway into the first turn and see who was behind me in positions two-through-five, and I knew I couldn't allow any of the slower cars hold me up too long or I'd have to contend with Mays andï¿½Buckingham, and both of those guys know how to get around this place since it's their home track."

Mays got around Champ for second on lap two racing off the fourth turn, while fat qualifier Jordy Nipper was roaring towards the front from his seventh-starting position, moving into fifth also on the second circuit. But he wasn't finished, as one lap later he continued riding the high line around the cornersï¿½and quickly picked off Buckingham and Llewellyn to settle into third place. Caution waved when Champ slowed with a flat tire at the end of the backstretch going into the third turn.

Peeples once again chose the outside of row one to restart, with Mays forced to the bottom. Buckingham dropped to the inside of the second row, with Nipper lining up outside. Peeples wasted no time in putting distance between himself, Mays, Nipper and Buckingham. Buckingham passed Nipper to go back into third on lap 18 racing off the fourth turn.

On lap 19, Thomas worked his way around Llewellyn into fifth, and two circuits later he passed Nipper to move into fourth. Now running ahead of both (Nipper and Cooper) of his closest challengers for the national title, Thomas was well on his way to earning the series championship. But the last thing he wanted to see, as well as race leader Peeples, was the caution flag waving — which it did on lap 30 when Vic Chandler spun directly in front of Peeples in turn two as he was about to go a lap down.

Back under green, and with a clear track ahead, Peeples began to pull away from Mays, Buckingham, Thomas and Nipper. But what once was a half-straightaway advantage quickly shrunk to just a couple of lengths when the race leader experienced difficulty in putting several cars down a lap once he reached the tail of the field.

With Mays, Buckingham, Thomas and Nipper all closing in, Peeples made a bold move to quickly overtake Greg Burchett, Chris Cantrell, Billy Thompson and Chandler between laps 58-62 to put some real estate between himself and his closest pursuers. Comfortably out front by almost a full-straightaway, Peeples saw his lead evaporate on lap 73 when Champ spun off turn two on the backstretch.

But Peeples stayed in control during a green-white-checkered finish for a victory worth $2,000.