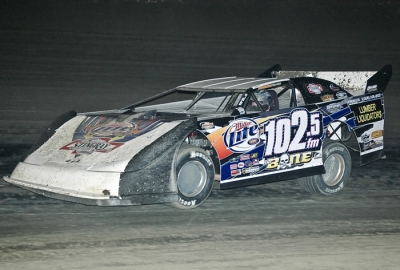 Driving the Miller Lite-sponsored Rocket, McCreadie started in the 12th starting spot and quickly moved up to the top five during the opening laps of the race. McCreadie moved into the second spot on lap 19, took the lead from Smith on a lap-21 restart and pulled away until the last few laps of a 100-lap race slowed by 16 cautions.

Smith challenged McCreadie the last three laps. On the last lap, Smith went to the outside of the leader and pulled up to McCreadie’s door. Smith slid to the high side in turn two, and McCreadie pulled away coming off the second turn. Smith set sail down the backstretch, and caught McCreadie in turn four with the checkered flag in sight.

McCreadie got sideways in turn four right in front of Smith, who had to check up to keep from hitting the leader. Smith tried to make a hard left and go under McCreadie, but the leader regrouped and beat Smith to the checkered flag by less than one second.

“When I saw all the flash bulbs go off in turn one on the last lap, I knew somebody was out there (on the outside),” McCreadie said. “Then I got sideways in turn four coming down to the checkered flag, but Shan raced me clean. He could have turned me for $10,000, but he didn’t, and I really respect him for that.”

Smith settled for second, just shy of posting a clean sweep of the event. On Friday night, Smith turned in the overall fast time among the 60 entrants with a lap around the third-mile clay oval in 15.946 seconds, and then won the first of six 20-lap heat races to earn the pole position for the race.

“I think I messed up trying to go to the outside in turn one on the final lap,” Smith said. “If would have waited until the last two turns, I know I would have been in a better position to pass McCreadie for the win. I was just too close to him when he got sideways, and all I could do was get on the brakes. I could have turned him, but I don’t race that way, not even for $10,000.”

The race was caution-filled during the first half of the race, with 14 of 16 yellow flags coming out before lap 46. The double-file restarts made for multiple position changes, as drivers ran in the top 10 early, but then fell back as drivers moved through the field.