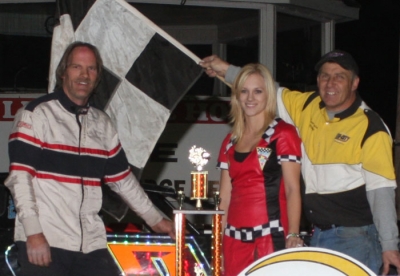 Oller also picked up $20 apiece for leading each of 40 laps as he outran Danny Haynes, Bobby Dauderman, Mike Collins and Steve Cole in the final CARS points race of the season. CARS weekly points champion Nick Lyons of Centralia, Ill., finished 14th and rookie of the year Josh Harris rallied from the 12th row to finish eighth.

In the feature, Oller was able to keep a comfortable margin throughout while a variety of drivers battled for second. Haynes came from the eighth starting spot and battled with Dauderman for the last half of the main event as they swapped position back and forth. Haynes eventually used lapped traffic to separate himself from Dauderman and sew up the second spot.