Rainey outruns Johnson, gets $3,000 at Maryville 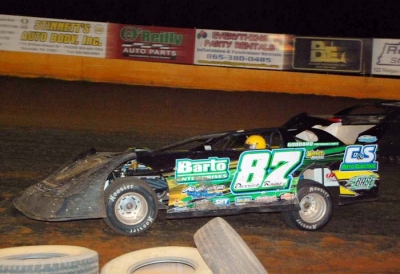 MARYVILLE, Tenn. (July 18) — Derrick Rainey of Powder Springs, Ga., led the final 17 laps Saturday at Mountain Raceway Park en route to his second NeSmith Chevrolet Dirt Late Model Series victory of the season. The eighth-starting Rainey took the high line at the 4/10-mile oval, using the long straightaways and bump-drafting to get an advantage on his competitors. Rainey took the lead from Ronnie Johnson of Chattanooga, Tenn., on lap 34.

“That was a thrill for me to race for the lead side-by-side with my idol Ronnie Johnson,” Rainey said. “Ronnie is one of the best there is, and it looked like he had us covered tonight, so this is a very special win for me and my crew.”

Johnson finished second after leading 31 laps of the 50-lapper in a Warrior Race Car he'd never raced before. Aaron Ridley of Chatsworth, Ga., posted his second-straight top three finish of the weekend in third while fast qualifier Matthew Turner of Dawsonville, Ga., and 14th-starting Jensen Ford of Piney Flats, Tenn., rounded out the top five. Turner led the first two laps before Johnson took the point.

Notes: Rainey's Warrior Race Car is sponsored by Barto Enterprises, C&S Auto Electric and Hays Family Racing. ... Tom Maddox of Centre, Ala., was looking for his second straight series victory after winning Friday at Wartburg (Tenn.) Speedway. Maddox crashed his primary car in qualifying and jumped into teammate Gathan Burns's car for the rest of the night, finishing eighth. ... Fifteen drivers completed 50 laps. ... After the feature, Ronnie Johnson, Eric Cooley, Josh Henry and Hunter Best participated in the Ride For Life by giving race fans with a highest bids during a special silent auction a six-lap ride around Mountain Raceway Park in a two-seat Dirt Late Model. The auctions raised over $1,000 for the local chapter of the American Cancer Society. ... After a four-week break, the series returns to action Aug. 14-15 with another Tennessee weekend at Wartburg and Maryville.