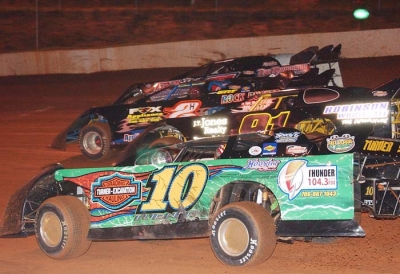 Knowles took the lead on lap four, and went on to post the $2,500 victory. With his $2,000 win on Friday night at Penton Raceway, Knowles was the top point driver in the two race series for a $1,000 bonus, and he also picked up a $1,000 bonus from GM Performance Parts for winning both races. That brought his two-day earnings to $6,500.

“When I woke up this morning, I never dreamed I could win two of these races in a row,” Knowles said. “This has been the best weekend of my career. I was going to concentrate on trying to win the NeSmith Chevrolet Weekly Racing Series East Region Championship, but I may have to run some more of these national touring events.”

Hometown driver Terrance Nowell finished second in The Racing Zone GRT, and challenged Knowles for the lead after a late-race restart, but Knowles was up to the challenge and pulled away to take the checkered flag just over three seconds ahead of Nowell.

“I just about gave the race away after that restart to Terrance Nowell, and we had to race hard for a lap before I could get going,” Knowles said. “Terrance is a good clean racer, and I think we got together there once, but I know it was nothing intentional by either one of us, and it was just hard racing.”

Reigning track champion Richie Stephens of Phenix City took the third spot in the Darda Tire GRT, and Chase Washington of Houlka, Miss., was awarded the fourth spot after Travis Pennington of Winston, Ga., was light at the scales during the post-race weigh-in. Eric Cooley of Fulton, Miss., drove his 78 Towing and Recovery Victory Circle to fifth position, and took over the NeSmith Chevrolet points leader over two-time series champion David Gentry of Lewisburg, Tenn., who lasted just four laps and finished 22nd.

Notes: Chase Edge won the GM Performance Parts Hard Charger honors with his 18th-to-sixth run. ... Ten of 24 starters completed 50 laps. ... Next up for the series is a June 12-13 weekend in Mississippi with events at Hattiesburg Motorsports Park and Jackson Motor Speedway.