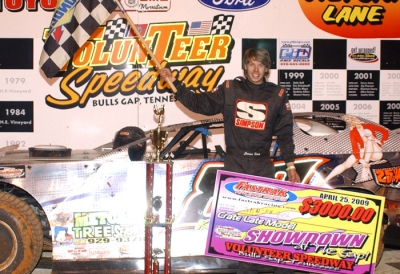 “It’s very tough to outrun all these traveling racers, but my car was really good tonight," Ford said in victory lane. "I could drive the car anywhere I needed on the track and that really helped when I encountered slower cars to lap them. I don’t really know what my lap times were at the finish, but I believe my car was just as fast at the end as it was at the beginning."

Lee Cooper of Greer, S.C., finished second while Jonathan Davenport of Blairsville, Ga., Vic Chandler of Weaverville, N.C., and Arthur Walker of Forest, Va., rounded out the top five. Royce Bray of Hull, Ga., ran among the leaders most of the way but slipped back to sixth with about 10 laps remaining after getting too high in turns three and four.

The frontstretch was also the site of a lap-39 wreck triggered by contact between fast qualifier Shanon Buckingham and Anthony White as they battled in the top five. Owen Osteen was also caught up in the accident and was visibly upset in climbing from his damaged car in turn one.