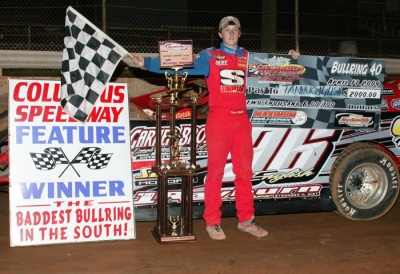 COLUMBUS, Miss. (April 17) — Teenager Tanner English of Benton, Ky., in the was awarded Friday's NeSmith Chevrolet Dirt Late Model Series win in the 40-lap feature at Columbus Speedway after the disqualification of apparent winner Ronny Lee Hollingsworth of Northport, Ala. During the postrace inspection,Hollingsworth’s crate engine was found to have illegal valve springs, handing the fast qualifier and polesitter English the victory.

English took the lead on lap two from Derrick Rainey of Powder Springs, Ga., but lost the point to Hollingsworth after a lap-26 restart. English looked like he was going to have to settle for second after leading 27 laps of the race, but the technical inspection changed things in English’s favor.

Gentry holds the points lead over Larry Boutwell of Baker, Fla., who started third but cut down a tire early and ended up 13th.