Notes: New-look Gentry is back to his old ways 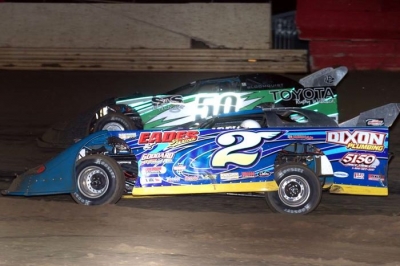 Two-time NeSmith Chevrolet Dirt Late Model Series champion David Gentry of Lewisburg, Tenn., is on top of the points chase after the first five series events. Gentry has changed his look, his number, and his chassis brand in his quest of a third championship.

Gentry unveiled a new Warrior Race Car for the three-race series at East Bay Raceway Park near Tampa, Fla., on Feb. 19-21, featuring a vibrant blue wrap from Maximum Signs and Graphics of Corinth, Miss., with a bright yellow No. 2 on the doors.

The new number represents the “Flying Deuce” in honor of his father-in-law Butch Eades, who carried the famous digit to many wins in Volunteer State competition through the years. The color scheme offers a representation of Gentry’s “Lewisburg Lightning” nickname.

Warriors off to hot start

Defending NeSmith Chevrolet Series manufacturers' champion Warrior Race Cars, built by Goddard Performance of Knoxville, Tenn., is off to a fast start after the first five events of the 2009 season.

Warriors have won three of the first five events with National Dirt Late Model Hall of Fame Inductee Ronnie Johnson of Chattanooga, Tenn., taking the win at Columbus (Miss.) Speedway on Jan. 31, and Doug Horton of Bruceton Mills, W.Va., picking up a pair of victories at East Bay Feb. 19-20.

In addition to Gentry leading series points, the 2006 NeSmith Chevrolet Weekly Racing Series East Region Champion Jason Wilson of Margaret, Ala., leads the Sunoco Race Fuels Rookie of the Year point standings in a Warrior Race Car, and is ninth overall in points.

Drivers in Warrior Race Cars have also led 122 of a possible 210 laps of series competition. Horton has led a series-leading 76 laps, last year's rookie of the year Scott Knowles of Lanett, Ala., has led 30 laps, Johnson has led 15 laps, and Danny Peoples of Margaret, Ala., has led one lap.

Larry Boutwell is trying to shake off his recent distinction of being stuck in second place. Boutwell finished second in the 2008 NeSmith Chevrolet Dirt Late Model Series points, and has been in the second spot of the 2009 standings since the third race of the season. Boutwell has three top-10 finishes in the first five events of the 2009 season.

“We struggled a little bit at East Bay, so we feel fortunate to be where we are in the point standings,” Boutwell said. “I hope once we get to some tracks we run better at, we can get over that second-place hump, but if we can get into the point lead, we’re going to have to work even harder to stay there.”

Brad Hall of Knoxville, Tenn., went into the East Bay trio of races leading NeSmith Chevrolet points following a victory at Talladega (Ala.) Short Track's season opener on Jan. 4 and a second-place finish at Columbus.

Hall received attention for his early-season success in that it came in a 5-year-old Rocket Chassis powered by a $3,000, 2-year-old 350 horsepower steel-head GM Performance 602 Crate engine with the original factory sealing bolts. The poster boy for economy racers pulled his race car to TST on an open trailer with a half-ton pickup off his father’s used car lot. The pickup was sold after the TST race, and Hall pulled his open trailer with a 10-year-old cube van to Columbus and East Bay.

The marketing director of Knoxville-based Pilot Oil read about Hall’s “David Defeats Goliath” story, and they stepped up to the plate to provide Hall with sponsorship from Pilot Travel Centers just before Hall pointed the cube van pulling the open trailer to East Bay.

On Feb. 19, Hall struggled during qualifying, turning in the 30th fastest time out of 44 entries. That started Hall deep in the fourth heat race, and a seventh-place finish put him in the middle of the line-up for a consolation race.

Hall kept working on his race car, and found the handle, as he rallied to finish second and earn the 22nd starting spot for the main event. The positive momentum for Hall continued in the main event, as he charged up to the ninth spot by the 13th lap. But just as quick as he bolted to the front of the pack, the tired 602 engine overheated and ended his evening.

Fearing damage to the cooked 602, Hall pulled a 400-horsepower aluminum-head GM Performance 604 Crate Engine out of the back of the cube van and got ready for Feb. 20 action. Hall never got the car accustomed to the added 150 pounds of weight the 604 engine requires on Feb. 20. He qualified 46th out of 47 entries, but he kept working, and hoped for better results.

Using the heat race and consolation as test sessions on Feb. 20 paid off the next day. Hall found something, as he qualified sixth-quick, and finished sixth in the feature race. That finish, and all of the hard work the night before, kept Hall in the championship hunt. He's third in the NeSmith Chevrolet standings with 370 points, just 24 points behind first-place.

Buckingham won the fourth annual NeSmith Chevrolet World Championship Race in December and the $10,000 top prize. On Feb. 19, Buckingham was running fourth, but cut down a left-front tire under caution on lap 14. Instead of changing the tire and restarting at the back of the pack, Buckingham said he didn’t want to risk tearing the car up.

His decision to save the car for the next two nights paid off, as he was the fast qualifier and led four laps on Feb. 20 in an exciting side-by-side battle with Doug Horton. Buckingham finished second to Horton to earn $1,350. On February 21, Buckingham was once again the fastest qualifier, and led wire-to-wire for the $3,100 win.

Eric Cooley of Fulton, Miss., embarked on his sophomore season of NeSmith Chevrolet competition with a new Victory Circle chassis out of the shop of Hall of Fame dirt racer Billy Moyer. Cooley has two top-10 finishes in five starts and is tied for third in series standings. ...ï¿½ A total of 51 drivers entered the three NeSmith Chevrolet events at East Bay. Fifteen drivers made the main event for all three shows. .... Eleven different states were represented with 19 from Florida, nine from Mississippi, eight from Georgia, four from Tennessee, three each from Alabama and West Virginia, and one each from Indiana, Kentucky, Louisiana, Missouri, and Virginia. ... Next up for NeSmith Chevrolet competitors is April 17-18 action at the Crosstown Challenge in Columbus, Miss. Columbus Speedway, on the east side of town, will host a 40-lap, $2,000-to-win event on April 17 while Magnolia Motor Speedway, on the west side of town, will present a 50-lap, $2,500-to-win main event on April 18.