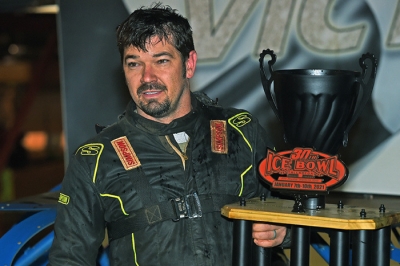 No driver was heading toward the Crate Racin’ USA 602 Late Model portion of the East Bay Winternationals any hotter than Seth Wimpey.

The 37-year-old driver from Blue Ridge, Ga., has already logged three special event feature victories worth $4,000 through the first six weeks of the year.

Because of wintry weather faced by traveling race teams, and wet weather at East Bay Raceway Park, the division's debut at the Gibsonton, Fla., oval was cancelled, but Wimpey still stands as the hottest driver in the country in 602 Crate action. | Slideshow

Wimpey's winter success started with a $1,500 victory during the Ice Bowl weekend at Talladega Short Track in Eastaboga, Ala.. He added a $1,000 Cabin Fever victory at Boyd's Speedway in Ringgold, Ga., along with a $1,500 Winter Breeze victory at Moulton (Ala.) Speedway.

The good-natured Wimpey, who missed out on his first trip to East Bay, "started racing these (602 Crates) because it’s not such a crazy deal on the shocks. It’s a division that’s a little more affordable.”

Wimpey has been working closely with fellow racer Booger Brooks, a notable driver who has experienced career-long success in multiple dirt racing divisions. Brooks flipped violently last October in a heat race during the annual World Short Track Championships at the Dirt Track at Charlotte while driving a Longhorn Chassis owned by Wimpey.

Their fortunes together turned quickly three months later, and the pair stood side by side in the winner’s circle at Talladega on Jan. 10 after Wimpey won in a Train Chassis built by Benji Cole. They’re on a roll, and have clearly established a hot streak.

“I actually finished second at Charlotte after Booger had that crash earlier in the weekend, but my car was found to be 9 pounds light and we got disqualified,” Wimpey said. “Booger and I got hooked up, and while that really didn’t turn out to a be a great weekend for us resultswise, we’ve really been having some good runs together here lately.”

Wimpey, the brother-in-law of former Southern All Star Series champion Shane Tankersley, also has his eyes peeled toward upcoming high-profile action at the famed Bristol (Tenn.) Motor Speedway with the NASCAR oval transitioning to dirt for the Bristol Dirt Nationals slated for March 15-20.

Crate 602 racer Morgen Lambert of Booneville, Miss., enjoys competing at new tracks, but East Bay's cancellation robs him the opportunity to run at the track a long-standing reputation of the track as an in-your-face, elbows-up oval.

"I started racing these cars about three years ago after starting in go-karts, and just love to do it," Lambert said. "I really like going to new places. We know we ain’t gonna win all of ‘em, but we’re having fun with it.”

Lambert was a 10-time winner last season and posted a fourth-place finish last month in the 602 Crate division at Talladega on Ice Bowl weekend. He also entered winter action at All-Tech Raceway in Ellisville, Fla.

“We don’t race for money, and we’re doing this stuff mostly for the fun,” Lambert said. “We ain’t making no money at it, but we pay our family bills first, and the rest we spend on our racing because it’s just what we like to do. We just had our best season ever, and we’re hoping to have another one just like it. We’ve set a goal for 15 feature wins after getting 10 last year, so maybe we can start with one down there, and reach our goals again in 2021.”

Wilson moving on up

Another driver who had planned on an East Bay trip was J.C. Wilson of Milton, Fla., last season's third-place finisher in Crate Racin' USA points for 602 Crates. The son of former racer Frank Wilson is plotting a promotion to the 604 Crate Late Model division for 2021 in following his father's tire tracks.

“My dad was racing every Friday and Saturday night, and I think that was around ’07 when I was a little kid,” the younger Wilson said. “He always told me when I got to be 12 years old, we’d get a race car for me. There were times I was allowed to miss school to travel to races with him. When I turned 12, we went to see Ricky Idom in Hattiesburg, Miss., and Dad placed an order to get me a car.”

The younger Wilson’s first victory in the street stock division came at age 13 when he beat his father at Southern Raceway in Milton, Fla. He also defeated dear ol’ Dad for the division’s season championship the next year by close to a 200-point margin, and won three races along the path to the title.

His career is already spotted with a notable amount of victories, Rookie of the Year awards and track championships.

“We’ve been using the 602 car to run a few 604 events here and there,” Wilson said. “We plan to run a lot more during the 2021 season, and we have a motor available to make the next move up. My father wants me to travel a little bit, because he says you’re only going to be as good as the drivers you’re racing against. We want to travel around some, and compete against the best in the division at some different tracks to see where we stand running against them.”

As the young man’s career continues to unfold, it will be his father’s advice that constantly rings in his ears.

“I’ve been going to races with him a long time,” Wilson said. “He’s guided me and given me advice my whole career. I’d get off school, and go straight to the shop to help him work on his cars. He’s always been there to help me. He’s always told me that some people aren’t serious enough about this stuff, so I’ve always tried to put a lot of effort into it because he’s always told me that’s what you have to do to be successful.”