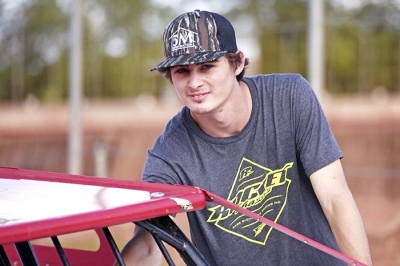 After wrapping up the Crate Racin’ USA Series points title with a $10,000 victory in the tour’s season finale at Deep South Speedway in Loxley, Ala., Wil Herrington had plenty of highlights to consider when asked what stood out most to him on his path to emerging among the top Crate Late Model drivers in the country in 2020. A season that has featured 14 overall victories has produced many memorable moments for the 24-year-old second-generation racer from Hawkinsville, Ga., but it was his start in Late Model racing more than a decade ago that he remembers most when reflecting on his rise to elite status in the Crate division.

“It’s been a long road to get here. A lot of hard work and a lot of people who have stood behind me and supported me,” said Herrington, whose 14 Crate Late Model victories included six wins in 17 races on the Crate Racin’ USA tour. “It’s crazy how far we’ve come. I started in 2009 in a ’77 Malibu. The next year Daddy bought me a Late Model. It was probably the dumbest thing he’s ever done in his whole life because I tore up a lot of stuff.”

Glen Herrington’s decision to put his young son in a Late Model with just one season of experience under his belt may have seemed premature at the time, but it set his son on a path that’s paying off handsomely a decade later. In racking up more than $50,000 in earnings for his family-owned team with victories at eight different tracks across the southeast, Herrington has had the kind of season many racers — including Herrington himself up until the start of this year — only dream about.

“You don’t ever think you’ll have a year like this. I guess it’s a dream season really,” said Herrington, whose season’s earnings include $10,000 for the Crate Racin’ USA title. “Growing up as a kid and dreaming about racing, you always dream you’ll have a year like this. Then it happens, and it’s just crazy. I don’t really think about it too much because there’s always the next race to worry about and try to win, so I guess it hasn’t really set in yet being that we’re still racing. Maybe after we’re done for the year I can look back on it some more and it’ll be more real to me.”

Herrington’s opportunity to reflect on the grandeur of his season will have to wait at least until after this weekend, when he plans to pull double-duty at Cochran (Ga.) Motor Speedway’s Gobbler 100. Racing at his home track, Herrington will be a favorite to win the event’s $3,000-to-win Crate Late Model feature — he’s won three out of five Crate Late Model starts at the track this season — but he’ll face much tougher odds as he races a Super Late Model for just the sixth time in his career in fielding a David Poole-owned Rocket for the $20,000-to-win Super Late Model portion of the event.

Cochran’s Thanksgiving weekend special event will most likely wrap up the season for Herrington, although he’s considering possibly extending his campaign into December. Whenever he does finally wrap up the year and allows time for his success to sink in, Herrington will have plenty of places to look to find the root of his team’s strong performance.

“It really takes a lot of things coming together on a deal like this,” said Herrington, who after finishing fourth in his first season on the Crate Racin’ USA tour a year ago upgraded to a new Rocket Chassis over the offseason. “This Rocket’s really been a turning point for me. It’s just been really good to me and really just fits my driving style. Last year we got out and got some experience. Then this year with the new car and having that experience, we just kind of put everything together. Me, my dad and (crew chief) Brian (Green) we all work together good. There’s not really just one thing. I think everything’s just kind of clicked for us.”

The successful campaign has been a rewarding experience for Herrington, not only as a payoff for the time and work he’s put in, but also for the sponsors and supporters who have helped him along the way.

“Everybody’s stood behind us for a long time,” Herrington said. “It’s like a big family really. We’ve had some good sponsors come on board. I’ve never had it before where we got sponsors who text or call me to ask if we need something. You just can’t beat having people behind ya like that, that just really want to see you succeed. I’m blessed, for sure.”

As good as his family-owned Crate Late Model team has performed this season, things haven’t gone quite as well in Herrington’s handful of Super Late Model starts. Herrington, who had made a couple of Super Late Model appearances in Limited or Crate Late Model cars prior to 2020, made his open-engine debut driving Poole’s Rocket in three Schaeffer’s Southern National races in July and later piloted a Wynn Motorsports Longhorn at Talladega Short Track’s unsanctioned NASCAR weekend doubleheader in October.

“I feel like we have as good a shot as anybody in the Crate, but the Super race, I know I need more experience with that,” said Herrington, who was slated to see more action in the Wynn Motorsports ride this season before owners Ricky and Robin Wynn delayed plans and took a temporary step back from racing. “I’d like to think maybe we can go out there and bust up a pretty good qualifying lap and put ourselves in a good spot this weekend, but it’s just hard to say. We’re going to practice Thursday night and hopefully have enough time to where I can get back comfortable in a Super, but it’s still an adjustment for me.

“If we can run top 10, I’ll be happy. I just know how tough it’s going to be. Back when we ran the Super earlier this year in the (Southern Nationals) races, people were telling me ‘You’re gonna win tonight. You’re gonna win it.’ But people don’t realize in Super racing there’s not just 10 or 15 good cars. Everybody’s good. That’s why they’re Super racing. That makes it a lot harder. But it just means we gotta work harder and I gotta get better.

Indeed, the early stages of Herrington’s transition to Super Late Models hasn’t been the smoothest of sailing. His average finish in his five Super starts this year was 14th with a best result of eighth in Screven Motor Speedway’s Southern Nationals event. But as he’s shown in his rise through the Crate Late Model ranks, Herrington is willing to put in time and work to improve. He plans to do just that next season with more Super Late Model racing on the docket.

His family has purchased a Clements Racing Engine to go in the new Rocket Chassis Herrington earned with his Crate Racin’ USA title. While he’ll still field his current car in many Crate Late Model events next season, Herrington hopes to get more Super experience in 2021 between the new car and select races in Poole’s Rocket.

“Racing’s all I ever wanted to do. I eat, sleep and breathe it,” Herrington said. “I’ve got some great people behind me that have put in a lot of work to see me be successful. I’m going to definitely put in the work to do it too. I’d like to think I can be successful (at Super racing). I’ve always wanted the chance to do it. Now it’s time to see if I can, and if I don’t make it, it won’t be because I didn’t try, that’s for sure.“

“Growing up as a kid and dreaming about racing, you always dream you’ll have a year like this. Then it happens, and it’s just crazy. I don’t really think about it too much because there’s always the next race to worry about and try to win, so I guess it hasn’t really set in yet being that we’re still racing.”

—14-race winner Wil Herrington after wrapping up the CRUSA title