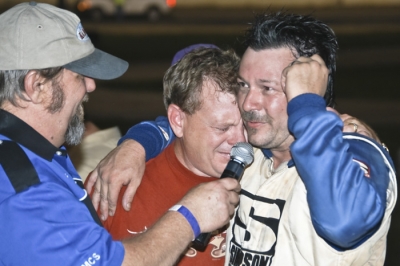 The bitterly sad news hit the short track racing world like an unexpected gut punch, and it’s since had a significant effect on the sport that reaches far and wide ever since June 7, 1995.

That was the date when a small Piper Cherokee negotiating its way through foggy skies crashed in a swamp near Gainesville, Fla., killing several members of driver James Powell III’s family, including his parents James “Buddy” Powell and Elizabeth Powell, along with his 4-year-old twin daughters Ashley and Nicole. Two more family members lost their lives in the crash, including his aunt Loveda McNair and his uncle C.J. Powell.

The incident sent the motorsports community into immediate shock during that long-ago summer, and changed the young driver’s life forever. Racing on both dirt and pavement from a home base in Astor, Fla., Powell’s successful racing career and his own life seemed to be heading in the right direction as he approached the start of his fourth decade on the planet, and suddenly it all seemed totally insignificant in the face of unbelievable sadness and tragedy.

It remains in many minds as one of the darkest days in Florida short track racing history.

From the worst tragedies spring eternal hope, and now 25 years later, Powell has come to grips as much as possible with a day that broke his heart into a million pieces. The crash gave birth to a special race — appropriately dubbed the Powell Family Memorial — that honors his family’s memory, and it has gradually grown from its first presentation at Ocala (Fla.) Speedway (now Bubba Raceway Park) to become what is perhaps dirt track racing’s biggest and most-anticipated event in the Sunshine State.

“My family had previously operated Ocala Speedway for 12 years, but the track had been sold to Paul Pitre, who was a close friend of the family,” Powell said. “After the plane crash, he came to us with the idea for the memorial race, and our family decided that might be a good idea to pay tribute to those who lost their lives. It took legs and did well from the start, and it’s still going strong.”

Staged at several Florida tracks, dirt and paved, this year's Oct. 23-24 event moves to All-Tech Raceway in Ellisville, Fla. for the first time. The new site promises to be a huge step for the race, which will pay an eye-popping $25,000 to the winner and be sanctioned as a non-points event by the Adairsville, Ga.-based Crate Racin’ USA organization.

A lofty car count is expected, and the grandstands might not be large enough  considering the race’s popularity among Sunshine State fans.

“When (track promoter) Wendell Durrance told me he felt we should do something special since this was the race’s 25th year, I didn’t know what he meant,” Powell said. “When he said he wanted to pay $25,000 to the winner, he asked me what I thought about that. I said, ‘Holy crap … I think it’s gonna be awesome!’

“He’s gone above and beyond what was expected for our family’s race, and he and his staff have gone out of their way to help us. We’ve always tried to run the race around the date the plane crash happened, which was June 7. I told him I know the date and will never forget it, so we all decided to move the date until later in the year when the weather is cooler, and there’s less chance of rain every day like we have down here during the summer months. The race honors the memory of our family, and they are calling all the time to get our feedback on their plans, and that means a lot to me.”

According to track personnel, eight previous race winners are expected to compete at this year’s version of the prestigious event, led by four-time winner Mark Whitener of Middleburg, Fla., who claimed his victories in 2014, ’15-'16 and '18.

The up-and-coming brigade will be well represented with expected appearances from 12-year-old Trey Mills and 13-year-old Jackson Hise. Mills has already won races at the facility, despite not yet hitting his teen years. He has also won a feature event at Volusia Speedway Park

Powell has mentally persevered through painful memories despite the heart-wrenching blow, and today stands strong and firm after a 32-year racing career that a few years ago reached its conclusion. He speaks today with confidence, having grown into a self-assured and successful man from the shy, tousled-haired youngster who barely spoke more than a word or two to curious onlookers while starting his racing career about 10 miles from home in a trademark white No. 19 at Volusia’s historic oval near Daytona.

Powell was following in his father’s footsteps, as Buddy Powell also competed in the Super Late Model division before his son’s career started to gain traction.

Powell’s life has hit brighter days since the crash that snatched away so many family members, and while he no longer competes as a racer, he and wife Kimberly have three children: 5-year-old Brystal, 9-year-old Cooper and 13-year-old Saige.

“I’m 54 years old, but I still feel like I’m about 24,” Powell said. “I just got to a point where I completely lost interest in racing. I drove for Mark Cowheard on pavement for 10-11 years, and we had a lot of fun and enjoyed much success together. That was probably the most fun I ever had in my career was driving for those guys. He got out, and at the time I had a grandmother who was needing care at home, we had our kids to spend our time around, and racing is such a tough business.

“It just takes so much time, and then you get home Sunday morning after the races that you’ve worked hard all week to make, and that day is completely shot because you’re exhausted. After a couple rides with different people, it got to the point where I was asking myself, ‘What in hell are you doing? And I finally said you know what? I’m done.’ ”

Powell walked away from a sport he’d participated in since he was a young man and says he never looked back.

“I raced for 32 years, and I guess I just got burned out,” Powell said. “The people changed, others I’d raced with for many years were getting away from it or slowing down, and it got to the point where it was almost like a job. The fun was gone. Now we take time to go out on a boat, or climb into a motorhome with the kids for the weekend, and that’s just what we do. I honestly don’t miss the racing, but we had a really good time for a lot of years with some really great people. I had a good career in the sport, and I’ll always be thankful for those opportunities.”

When such sadness strikes a person so young, it’s logical to expect that some extremely difficult personal times will follow. Such was the case with Powell, but he eventually grasped the entire tragedy, and figured out how to mentally deal with what happened. He even figured out how to relate his own experiences to others, and to help them deal with similar grief-stricken experiences.

“Not a day goes by that I don’t think about all of them,” Powell said. “It’ll never go away, and it’ll always be a part of my life, but you can’t change it. You eventually realize you have to take the cards you were dealt and move forward.

“I’ve actually talked to other families who have experienced similar grief in their lives, and that’s what I always try to tell them. They’ll ask, ‘How did you do it?’ And I just tell them it’s definitely not easy, but you have to keep living your own life and moving forward every day, and just do what you can to honor their memory. That’s pretty much what has gotten me to where I am today.”

While Powell has a firm grip on his own personal feelings after 25 years, there are still those memories that occasionally filter through his mind. He actually focuses on keeping their memory alive, and that includes working to keep a prominent family’s name in peoples’ minds in the tiny town where he lives.

“I can assure you they are all greatly missed daily, and there’s sometimes occasions that two or three times a day something will happen that makes me stop what I’m doing to think about them,” Powell said. “I suppose that will never stop happening as long as I’m around.

“We’ve bought a couple more campgrounds, and we still live in the same area, so we’ve managed to keep the family name involved in the local history. Our family had a good name and my parents did a lot to help people, and I’m proud that we’ve been able to carry that reputation on after what’s happened. That was something that was very important to me after the plane crash, and it’s something I’m very proud we’ve been able to do.”

Florida’s racing community will once again pay their utmost respects to the Powell family in mid-to-late October with the 25th running of the annual event, and someone will carry home a huge amount of money. Powell and friends will gather in the track’s parking lot for what he calls “a big ol' barbecue and a good time for all of our racing friends,” and more memories will be made by some of the most respected folks in the game.

“I might not be driving anymore, but people ask me all the time about this race, and it really is a very important deal to me,” Powell said. “It’s been held at a few different tracks … Inverness, Ocala, Volusia, and it’s sorta like a homecoming every year when people gather for it. You always see people you only see at a racetrack once or twice a year. It’s always good to get up with people you don’t see as often, and it’s a nice feeling to know that people still have that much respect for our family. It truly means a lot to me.”

The event turns a big sweeping corner with its whopping payoff this year, and the importance of that growth is not lost on Powell. The future is brighter than ever for his family’s memorial event, it has become a huge part of Florida racing folklore, and though he no longer straps into a race car’s cockpit on a regular basis, that respect people seem to have for his lost family members makes him happy.

“I honestly think the race is getting stronger than it’s ever been, and to see people honor my family every year for what they stood for as decent, hard-working people, and also to respect what they contributed to the sport … that just means so much to me on a personal level,” Powell said. “To know that so many people have enough respect for us to keep this race going has made a huge difference in our lives, and it’s very important to all of us.”

“You always see people you only see at a racetrack once or twice a year. It’s always good to get up with people you don’t see as often, and it’s a nice feeling to know that people still have that much respect for our family. It truly means a lot to me.”