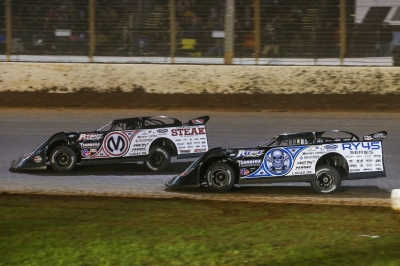 CONCORD, N.C. (Nov. 8) — Hearts were heavy in the Scott Bloomquist Racing camp during Friday’s Can-Am World Finals program at The Dirt Track at Charlotte. By the end of the night, though, there was some joy to help temper the sorrow.

“What else can you say?” Madden said, shaking his head at the outcome while discussing his latest success since joining Bloomquist’s team as a second driver in mid-July. “I can’t say no more.

“That was talked about before we went out there, how sweet that would be to have a one-two (finish) tonight,” he added. “That might not have been in our hands to have that happen, so … God’s plan.”

Even Jonathan Davenport of Blairsville, Ga., who led the feature’s first 31 laps before being overtaken by Madden on a restart and went on to finish third after ceding the runner-up spot to Bloomquist on the final circuit, acknowledged that karma probably wasn’t on his side this particular night.

“It’s weird how things work out,” Davenport said. “With the passing of Randy today and his cars running one-two tonight, it worked out the way it was supposed to.”

Normally Sweet would be with his buddy Bloomquist at Charlotte for the World Finals, staying and hanging out together for the duration of the weekend. But the record-setting Michigan short-track asphalt racer and founder of Sweet Manufacturing — a company that produces, among other items, innovative power-steering systems used broadly throughout the Dirt Late Model ranks — didn’t make the trip south this year as he was still recovering from a recent hospital stay, leaving Bloomquist without the man he affectionally calls “a second father” and his “partner in crime.”

Sweet’s absence became even more pronounced when Bloomquist learned on Friday morning that Sweet had passed away in his Kalamazoo, Mich., home. Bloomquist spent most of the ensuing morning and early-afternoon hours in his hauler at The Dirt Track, fielding a long series of phone calls from people throughout the racing industry who were hearing the news and reflecting on his more than two decades of friendship with Sweet.

There was no question, however, that the soon-to-be 56-year-old Bloomquist was going to climb in his No. 0’s cockpit for Friday night’s action.

“People asked me if I was gonna race,” Bloomquist said in a post-race interview with DirtonDirt.com’s Michael Rigsby. “I’m like, ‘Well, yeah, I’m gonna race. That’s what he would want us to do.’ I mean … hell.”

But there was also no denying that Sweet’s impact on Bloomquist, both personally and professionally, made Friday a difficult day for the Hall of Famer who’s known for his intimidating look.

“He’s such a big part of my program. He’s like a second father really,” Bloomquist said, bringing up the phrase he used to describe Sweet numerous times on Friday. “He’s done so much for me, and me and him, we just spent so much time together, (in) business and friendship. (Sweet’s passing is) just kind of one of them things you don’t think about, you don’t really expect.

“Who knows what’s in store for the future with things, but we’re gonna continue on. I’ll keep building cars (Bloomquist has been producing Dirt Late Models in partnership with Sweet since 2013) and doing what we always do.”

Madden, 44, certainly understood the impact Sweet’s death had on Bloomquist.

“I feel for Scott,” Madden said. “Him and Scott, man, they’ve done a lot together. It’s definitely a loss for Scott today. It’s a loss for all of us. I didn’t have near the relationship that Scott had with him, that’s for sure, but I respected Randy for what he’s done for the sport and for what he’s accomplished in his lifetime.”

While Madden didn’t have the deeply personal connection with Sweet that Bloomquist did, he still was close to the industry giant.

“I’ve known him for years,” Madden related. “I met him when I was driving for Barry (Wright); him and Barry were pretty tight too.

“I’ve known him a long time, and he always gave me lessons. Every time he’d see me he would teach me something. Some things he would get out there on. Some things I couldn’t grasp because he was way out there, but it wasn’t because he was dumb. It’s because I was too dumb to keep up with him … so I appreciate the time he would take to spend with me and talk to me about that stuff.

“I guess one of our last long conversations was at Cedar Lake (Speedway in New Richmond, Wis., where Madden won Aug. 3’s $50,000 USA Nationals). He gave me a big, long lesson on front-end stuff again. He liked to always give me a lesson. Every time he seen me he wanted to give me a lesson on what we needed to be doing and what I should be doing.”

Madden said he has “so many” Randy Sweet stories, everything from conversations at the racetrack to funnier episodes like seeing the famously eccentric Sweet “come out in a room with me with nothing on and walk around wearing just a hat.” One particular memory sticks out in Madden’s mind.

“Me, him and Scott were testing at Volusia Speedway (Park in Barberville, Fla.), and he was 60-something years old, in a white pair of overalls, laying under the car, helping me change a motor,” Madden recalled. “Nobody but me and him … that’s a moment that I’ll never forget. I’ll cherish him working on that race car and changing a motor with him. That’s pretty awesome.”

There was one thing about Sweet, beyond the man’s intelligence, of which Madden was certain: the guy was a true character, someone who went full-bore every minute of every day.

“I made a statement to Scott today, I said, ‘You know, Randy, he’s been hanging in there for a long time (fighting health issues). I think the reason why Randy’s been here as long as he has is, they weren’t really ready for Randy yet. They had to figure out, How we gonna accept this guy? Because Randy, he’s gonna tell ‘em, he’s gonna set ‘em straight, so I guarantee you Randy’s got a place of his own (in the afterlife).

Bloomquist readily agreed with Madden’s summation of Sweet. He knows that his buddy won’t soon be forgotten.

“I’ll tell you what, he has such a legacy,” Bloomquist said. “People really don’t even know what he’s done in racing, and what he’s done for racing. You know, that first rocket car he built (a wild, aerodynamic asphalt Late Model in which Sweet set speed records driving) was one of the first big, high-sideboard wedge car bodies. You look back at that car when he come out with it, it was so far ahead of anything anyone had ever seen.

“You know, he had a third-grade education, and he said, ‘One thing I’ve learned in life, you don’t have to be the smartest person. Just surround yourself with smart people and you can do a lot in life.’ Really, just common sense. That’s where really me and him just really hit it off. We could talk anything out.

“Really, you’d have to see Sweet Manufacturing and the facility and all the things that him and all the other guys up there have accomplished and have done,” he added. “You know, they call it ‘Randy World.’ Some day it should be a place people can visit and check out just to see what you can do with hard work.”

“Really, you’d have to see Sweet Manufacturing and the facility and all the things that him and all the other guys up there have accomplished and have done. You know, they call it ‘Randy World.’ Some day it should be a place people can visit and check out just to see what you can do with hard work.”