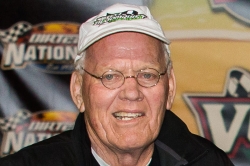 Randy Sweet, a record-setting Michigan short-track asphalt racer known as the Kalamazoo Kamikaze whose innovative power-steering systems are used broadly throughout Dirt Late Model competition, died this morning at age 72. His death was reported by Kalamazoo Speedway, where he won his first Late Model championship in 1975. | Slideshow

The legendary Sweet was a confidant of Hall of Famer Scott Bloomquist and partnered with the Mooresburg, Tenn., driver in chassis-building with Sweet-Bloomquist Race Cars from 2013 to 2019.

Beginning his racing career in 1963, Sweet developed and built his own cars through a lengthy career that included four track championships at Berlin Raceway in Marne, Mich., along with time-trial records at several tracks, including at Winchester (Ind.) Speedway for a half-mile lap that landed him on the cover of Stock Car Racing magazine. He won 19 of 22 features during in 1992 and competed as recently as 2016 in a career driving supermodifieds, sprint cars and Late Models.

“I think almost every Late Model running today is probably dependent on his products,” said Rocket Chassis co-owner Mark Richards, who “put one of the first (rack-and-pinions) that (Sweet) built on a car at (Ed) Howe’s shop in ’79” and has had a business relationship with Sweet for over a decade. “Randy has been the leader in this industry for all these years. It’s not like there were multiple companies out there that supply that (steering) product. He supplied just about everybody (in Dirt Late Model racing).

“It’s a bad day for Late Model racing. It’s definitely a big loss to the racing industry. He was very eccentric but very smart and had smart people around him, so hopefully there’s some kind of plan in place and everything continues the way he had built it.”