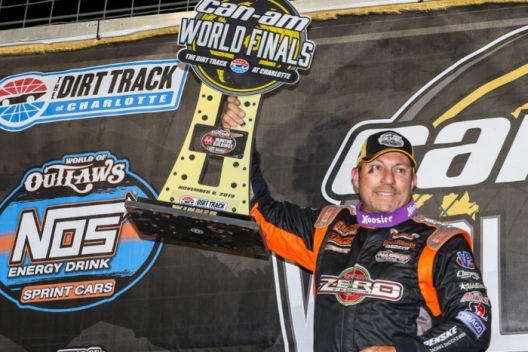 CONCORD, N.C. (Nov. 8) — A caution flag flew as Chris Madden appeared to be in the process of overtaking Jonathan Davenport for the lead in Friday night’s 50-lap Can-Am World Finals feature at The Dirt Track at Charlotte.

Did that stop Madden from adding another flourish to his spectacular run of success since joining Scott Bloomquist Racing at mid-season? Not a chance. The 44-year-old driver from Gray Court, S.C., simply finished the job on the ensuing lap-31 restart.

Using a power move to the inside of Davenport entering turn one, Madden surged past the Blairsville, Ga., racer to assume command and never looked back en route to a $12,000 World of Outlaws Morton Buildings Late Model Series victory in front of a massive crowd.

Madden recorded his third WoO triumph of 2019 — all coming since he became a teammate of Mooresburg, Tenn.’s Scott Bloomquist in July — by 0.533 of a second over the 55-year-old Bloomquist, who slipped by Davenport on the final circuit to finish in the runner-up spot.

The one-two finish for Scott Bloomquist Racing was an extra-special development because it came on the same day that Bloomquist’s longtime friend and business partner Randy Sweet died at 72 in his Kalamazoo, Mich., home.

“To get a one-two finish for him, what else can a man ask for?” Madden said of Sweet, a record-setting Michigan short-track asphalt racer whose innovative power-steering systems produced by his Sweet Manufacturing are used broadly throughout Dirt Late Model competition. “It’s pretty awesome.”

Davenport, 36, settled for a third-place finish after starting from the pole position and leading the race’s first 31 laps in a brand-new Lance Landers-owned Longhorn Race Car. Seventh-starter Chris Ferguson of Mt. Holly, N.C., slid his Bloomquist-built machine into fourth place on a lap-seven restart and stayed there for the remainder of the distance while eighth-starting WoO rookie Cade Dillard of Robeline, La., reached fifth on lap 11 with his MB Customs car and finished in the spot in his first-ever start at the 3/8-mile Charlotte oval.

A World Finals winner previously in 2016, Madden immediately flexed his muscle at the race’s initial start when he shot to second behind Davenport. He nearly swept straight into the top spot, in fact.

“I actually thought we had a shot at coming out with the lead off of turn two when the green flag dropped,” said Madden, who scored his 26th career WoO win. “But Jonathan got a big run off of that top down the back straightaway and was able to hold me off.”

Madden proceeded to settle into a battle for second with his boss, trading the position twice with Bloomquist during the A-main’s first half. Bloomquist snuck inside Madden to snatch the bridesmaid spot on a lap-nine restart and remained there until Madden ducked underneath Bloomquist to seize second on lap 21 after Bloomquist lost his momentum because Davenport crossed in front of him between turns one and two.

“We had a couple restarts, and I struggle a little for three or four laps,” Madden said, referring to losing second to Bloomquist. “I’ve been that way all year, but after I get rolling, I’m good.

“We was having to race with Scott pretty good on those restarts. He got by me one time on the (lap-nine) restart and then I had to race him real hard to get back. I knew just time was gonna be a huge factor of when (the track surface) was gonna rubber (and became difficult to pass), so I needed to make sure I was in position to be in the lead (at that time).”

After regaining second from Bloomquist and then having his lap-31 bid for the lead — a moment that saw Madden (racing high) and Bloomquist (running low) split Davenport exiting turn two — nixed by a caution flag for Dustin Mitchell of Chadbourn, N.C., slowing on the track, Madden made his race-winning move on the restart. He surged to the inside of turn one as Davenport entered the corner high enough to leave a door open.

“I just had a huge restart right there,” Madden related. “I knew if Jonathan went to the top, I was going to the bottom. I was able to stay with him right on the restart, he hit the top and I hit the bottom, and we carried a ton of speed through the corner and was able to beat him off the (second) corner.”

WoO officials had actually directed the field to go single-file for the lap-31 restart because the track surface had clearly begun to take rubber. Madden agreed with the call, but he didn’t feel it ruled out his chances of overtaking Davenport.

“I wasn’t surprised (by the call to restart single-file),” Madden said. “Those guys (officials) are pretty smart and pretty sharp. They can look and tell when a racetrack’s single-laned out.

“It didn’t worry me. I was just glad they done the right thing and didn’t tear up a bunch of people’s race cars. Single-file, rubbered-up racetracks, some people get a little antsy and you can get some stuff tore up.”

When asked if he thought Davenport drove into turn one outside the rubber far enough to leave the space necessary to make a pass, Madden doubted such a factor being at play.

“No, no, no, he knew it, Jonathan knew it,” Madden said. ”Jonathan’s from the South. He knows when it rubbers.

“It (the rubber) was kind of wide down there still (in turn one), so he was carrying a lot of speed through the middle and top down there in that corner. My car was good around the bottom, so I took the short distance and he took the long distance.

Davenport, meanwhile, maintained that he did miscalculate how much the track had locked down.

“Chris got by me in lapped traffic and the caution come out (on lap 31), but I never really ran the bottom getting in turn one when I was in clean air,” said Davenport, who was seeking his first World Finals victory since the 2015 finale. “I didn’t know it was rubbered that hard, because when I ran it I was behind cars and it was throwing a little bit of grit. So I just went in turn one (on the restart) like I always did but in clean air, and it was rubbered pretty hard down there and he drove right by me.

“That was my mistake there just not knowing.”

Davenport didn’t hang his head after ceding the lead and, later, second place when his last-ditch attempt to make an outside run on Madden rounding turns one and two on the last lap allowed Bloomquist to scoot by on the inside.

“Still, a pretty good race for us,” Davenport assessed. “We just didn’t make the few right adjustments on it. It was a brand new car, but it was really good there.”

Madden’s checkered flag was the second of his career at Charlotte, where he also scored a $16,000 triumph in a WoO event that was rescheduled to start the World Finals in 2008.

“I just like this place,” Madden said. “It’s a big, fast momentum place. You drive around here like driving on asphalt.”

What’s more, Madden tallied his eighth win since teaming up with Bloomquist in the wake of his breakup with Greg Bruening’s Skyline Motorsports team. His amazing second-half run in Bloomquist’s No. 0M has brought him $193,000-plus in first-place earnings and a total of 15 top-five and 17 top-10 finishes in 21 starts.

“It’s a great feeling. A lot of effort and a lot offhand work has been put into this. This is big ‘ol team that we have here.”

Bloomquist felt good about his performance, during which he had a perfect view of Madden’s winning pass.

“I actually was just on the verge of being a little loose and early in the race it really showed up,” Bloomquist said. “And then I got some heat in my tires and felt like I was pretty good and was definitely as good (as Madden). Then the longer we’d run, the track tightened up, so it made me get to where I was good.

“And then that one little check-up … Jonathan, when he checked up and turned down and I had to lift and I got loose (on lap 21), that gave Chris the chance to get back by me. Then (Madden) did a good job on that restart. That was a good, forced move, didn’t do anything out of line. The car was good and he drove it in and it stuck.”

“I was pressuring Jonathan right there at the end, getting under him,” Bloomquist said. “It felt like either his tires were gone or something was going away a little bit, but it was nice of him to move up for us and give us second there at the end. I thanked him for that.”

Brandon Sheppard of New Berlin, Ill., who entered the weekend having already clinched the 2019 WoO title, went to the outside to move from 13th to seventh by lap 28. His charge stalled, however, as the track surface took rubber and became one lane and he settled for a sixth-place finish.

Shane Clanton of Zebulon, Ga., finished seventh, good enough to move him from fourth to second in the WoO points standings heading into Saturday night’s season finale. He has a scant four-point edge on Chase Junghans of Manhattan, Kan., whose quiet 17th-place finish cost him the second spot in the points battle. Darrell Lanigan of Union, Ky., who spun out of the top 10 in turn four on lap nine and finished 22nd, is 22 points behind Clanton in fourth while 14th-place finisher Ricky Weiss of Headingley, Manitoba, trails Clanton by 30 points in fifth.

The feature was slowed by three caution flags, including a lap-seven break for Boom Briggs of Bear Lake, Pa., falling off the pace in turn four.