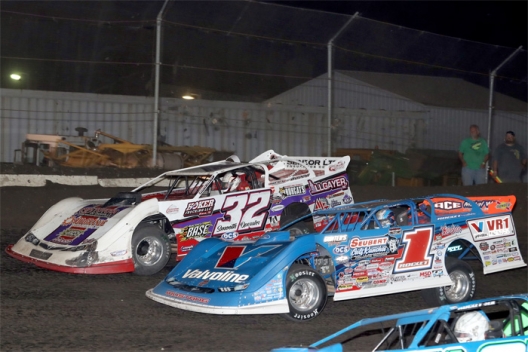 Saturday's Titan Industries FALS Spring Shootout — with $30,000 on the line in the MARS Racing Series event — was shaping up for a near-identical conclusion as that race three seasons ago with Sheppard hounding Pierce in the closing laps.

This time, the 25-year-old Oakwood, Ill., driver was able to fight off the Rocket Chassis house car driver from New Berlin, Ill., for a dramatic victory of his own. In the closing laps, Pierce had "flashbacks to the PDC" when Sheppard made contact in grinding past Pierce in a thrilling finish.

"This time, he left me a little room, luckily because I probably would have stayed right in the gas and it wouldn't have been pretty," said Pierce, who started on the pole and led all 60 laps. "So thanks to him for doing that. It's just awesome man."

The third-starting Sheppard finished 0.367 of a second behind at the checkers with eighth-starting Hudson O'Neal of Martinsville, Ind., in third. Mike Marlar of Winfield, Tenn., charged from the eighth row to finish fourth and Dennis Erb Jr. of Carpentersville, Ill., who held the second position for half the race, ended up fifth.

Tyler Erb of New Waverly, Texas, the previous night's MARS winner at Farmer City Raceway, was running third on the 40th lap when he lost power and stopped in turn four.

While a flurry of drivers bobbed and weaved in the top five throughout the race, Pierce maintained control with few challenges until late in the race when Sheppard, who moved into second for good on the 45th lap, turned up the wick. Pierce could sense the race tightening up.

"I knew whoever was in second had to be on my ass," Pierce said. "I was a nervous wreck there."

He was glad to finish off the four-race Illinois Speedweek with a victory after a spin at Banner's Spoon River Speedway, struggles at Lincoln Speedway and a redeeming rally at Farmer City Raceway.

"We worked so hard this week," he said. "All my crew, got to give a huge thanks to them. I made a bonehead move at Spoon falling off the track and costing us a good finish. I haven't qualified well the last two nights and felt like I was just stepping on it. So tonight we redeemed ourselves ... It's just awesome.

"I think we've kind of hit our stride last night. We found a good setup that works for this car. You know, some cars might be a little different. I think we found it so it works really well and I'm happy with it. You know, the track was also awesome tonight. I know that bottom probably went away, but you know, these fans love seeing seeing cushion-banging, wall-riding, giving it your all at end, and me and Sheppy were doing that. So once again, thanks for him leaving me room."

Sheppard, Spoon River's winner on Wednesday and the $10,000 Illinois Speedweek champion, gave Pierce a good-natured congratulations in victory lane after the exciting finish.

"That was that was a heck of a race man," he said. "We had a really good car there. It was a lot of run racing with Bobby and them guys, banging the boards like we do here at FALS. Another great racetrack. They worked really hard on it and it's just badass every time we come here, for lack of better words.

"I thought I was gonna be able to pull off a slider again getting into (turn) three, but I got down into three really nice and good and stuff and then I got to the middle and I broke traction and I knew I was gonna run into him again like the Prairie Dirt Classic back then (so) when I went back to the gas after I got down in the corner, I couldn't go nowhere. So he was gonna — no matter what I did — he was going to drive back around me."

Watching the Pierce-Sheppard duel ahead of him, O'Neal wondered if things might play in his favor.

"We closed about three quarters of a straightaway there at the end, but they were racing and it was just circumstances. I just got myself too far behind," O'Neal said. "Too long in that run and I didn't have enough time to get back to them. So I was hoping, you know, they were gonna throw some last-lap sliders there and maybe maybe get into each other and let me sneak up there ... but they they did a great job.

"It looked like a crazy finish coming off of (turn) four there. It almost gave me flashbacks — I think it was 2019 whenever him and Brandon (battled) for the PDC — congrats to Bobby, congrats to Brandon. It's been a great week. We'll continue to try and build off of it. I think we got to get hot rod going forward."

Two cautions slowed the feature, the first on the 24th lap for Kyle Hammer's turn-two spin. Another yellow flag dropped on lap 41 for Tyler Erb's demise

Notes: Pierce has four overall victories in 2022. ... The $30,000 payday was his richest since a $100,000 triumph last November at Las Vegas (Nev.) Motor Speedway (that $50,000 victory included a $50,000 bonus from XR). ... Sixth-running Stormy Scott retired on the 17th lap with a vibration in the motor. ... After Ryan Unzicker made contact with Ryan Gustin during the sixth heat race. Gustin displayed his frustration, making repeated contact with Unzicker under the ensuing caution flag, with both retiring from the heat race after completing four laps. ... Among other drivers failing to make the feature lineup: Last week's Fairbury winner Tommy Sheppard Jr., Billy Moyer Jr., Kevin Weaver, Morgan Bagley, Mike Spatola, Cade Dillard, Taylor Scheffler, Scott Schmitt, Bob Gardner, Logan Martin and Josh Putnam.