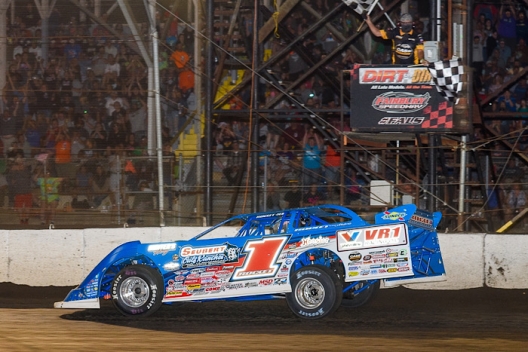 FAIRBURY, Ill. — Kyle Larson, Bobby Pierce, Mike Marlar, Tanner English and Garrett Smith shared the runner-up spot to some degree Saturday at Fairbury Speedway, the one place that had been in the vicinity of polesitter Brandon Sheppard during the 32nd Prairie Dirt Classic.

The fresh rotation of challengers — like a baseball team working through the bullpen to keep the attack raging onward — did nothing to stunt the bank-breaking momentum of the home-state wheelman, who from start-to-finish commanded the ultimate bullring crown jewel event.

Sheppard’s domination in leading all 100 laps from the point made his third career Prairie Dirt Classic triumph worth $100,000 — two $50,000 earnings in one night when accounting the winner’s share and lap money.

The New Berlin, Ill., driver topped Mike Marlar by 0.923 of a second to move into a tie with Shannon Babb for third all-time in Prairie Dirt Classic wins. Sheppard won the event in 2017 and ’19, but the latest clearly ranks atop them all.

“It’s all hat's off to (Fairbury owner) Matt Curl and his team, and everybody with (FloRacing) and DirtonDirt, and everybody that helps put this deal together. This is a phenomenal event,” Sheppard said. “I mean, there’s more hype here in the fans in the stands, in my opinion, than there is at Eldora. This place is electric. It’s awesome. It gives me goosebumps every time I come here.

“Then to start up front in the feature and lead all them laps is pretty amazing. I didn’t know if it could be done or not, but if I was going to do it, I was going to have to lead the first lap. I knew I had to get by (second-starting) Garrett (Smith) there, and I think we got into each other a little bit going into turn one. So I want to apologize for that.”

The initial start was perhaps the only point of the race Sheppard had been under duress.

Marlar stayed within reach of Sheppard for most of the night, but couldn't turn his 21st straight top-five run into his first Prairie Dirt Classic crown. The Tennessee driver took a peak inside Sheppard’s No. 1 Rocket Chassis house car multiple times following the race’s final restart with three laps to go, but Marlar’s bottom-groove adamancy didn’t stand much of a chance against Sheppard’s top-groove ways.

“I was a little over on the right-rear more than I needed to be. I couldn’t steer good through the center of the corner,” Marlar said. “It was a bummer, because I sat there watching him get rich every lap. I was trying to pass him. I got up beside him, but couldn’t end up completing the pass. We had plenty of opportunities, just couldn’t do it. It was a fun race. Congrats to Brandon.”

Smith, the 18-year-old who won one of Friday’s semifeatures, didn’t last long in the runner-up position and fell outside of the top-10 by halfway before finishing 15th after making a lap-73 pit stop for a tire change.

Larson, the reigning event winner, clawed his way to second on a lap-80 restart after slipping to as low as ninth in the feature, slinging his No. 6 Longhorn Chassis around the quarter-mile at a comparable rate to Sheppard’s tone-setting pace. But the NASCAR Cup champion’s hopes were shorted when a pair of flat tires shortly after his arrival in second thwarted him off the podium.

Bobby Pierce of Oakwood, Ill., stood perhaps as Sheppard’s biggest challenger of the night. Pierce charged from the 16th-starting spot to second by lap 44 and hounded Sheppard for the win all the way through lap 73.

During the race’s longest green-flag run of 28 laps between laps 21 and 49, Pierce went from ninth to second, pulling to within a second of Sheppard as the eventual winner dispatched slower cars in traffic with relative ease. It was throughout that stretch Marlar dropped from second to fifth, as the Tennessean’s bottom lane slowed in traffic.

“It was my fault I couldn’t pass. Just misadjusted on the car,” Marlar said. “We had it really close and ran really stout here against 80 some cars, and try to beat Sheppy and Bobby on their home turf. It’s a tough deal. Glad we could compete with them, that’s for sure.”

The lap-73 caution, however, made those preceding 24 laps the last run that required Sheppard to work through heavy traffic. On lap 68, Sheppard executed the move that virtually shut the door on Pierce the rest of the night, when he knifed through the middle of Smith and Shane Clanton in traffic. Pierce had lurked a car behind Sheppard at the time, and upon Sheppard’s thread of the needle Pierce went from lurking to a full second behind in a lap.

On the lap-73 restart, Pierce began his backslide with brake issues, dropping from second to seventh in three laps before retiring on lap 80 after bringing out a caution flag.

Tanner English snatched second briefly from Marlar with 16 laps to go riding around the bottom, but couldn’t quite hold on. The World of Outlaws rookie gladly wound up third.

“This is big-time for us, just to be in contention for the win,” English said. “We were up there. I don’t know if we had anything for Sheppard, but we might have got second there if a few things worked out different. I can’t say enough about this team and Riggs Motorsports. We’ve been fighting through this year pretty hard. We’ve had our ups and downs. … We’re looking forward to the future.”

A caution with seven laps remaining for Josh Richards erased Sheppard’s 3.4-second lead, and then the final stoppage with three laps to go again sized up last-ditch attempts for Marlar and English to possibly steal the big win. Sheppard made sure to complete the mission.

“Honestly, it’s been leading up to this. Our guys have been working their tails off on this race car. It’s been fast night in and night out,” Sheppard said. “We’ve just had a lot of bad luck lately and a little bit inconsistent. Part of it’s me. It’s good to get the confidence back at FALS here for sure.

“We unloaded at hot laps yesterday and was really fast, and progressively got better all weekend. After hot laps today I knew we were going to be really good. Actually, the track prep was awesome, but it threw me for a curve because both corners had ruts about a lane off the top and that made my normal line I run almost impossible to do.

“At the beginning, I was going to turn over in one and two, and then finally I got up above it. As I said, it’s unbelievable.”

Sheppard’s scare of the day didn’t even happen during the 100-lap feature, or at the wheel of his No. 1 Rocket Chassis house car on Saturday. His wife, Mikala, nearly went into labor this morning, which Sheppard called “a little bit of a scare for all of us.”

“But luckily she got back here and she’s all right,” said Sheppard, who smoothed the day over by midnight with his 80th career WoO triumph.

“Everything was on point tonight, so hopefully this is a confidence booster for the whole team going into next week,” Sheppard added. “We’re super excited. There’s still a lot of big money coming up. I thin we have our car pretty good. Hopefully we can carry this on.”