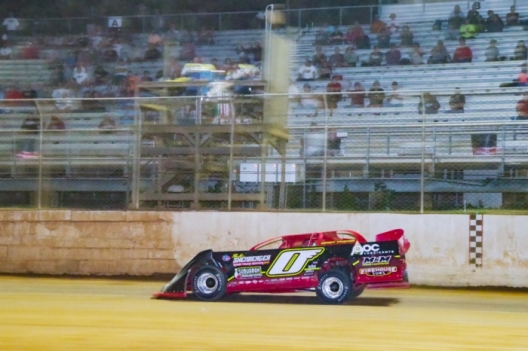 Brian Rhoad/wrtspeedwerx.com
Rick Eckert takes the checkers for his $5,000 Port Royal victory.
What won the race: Fourth-starting Rick Eckert of York, Pa., took the lead with an inside move entering turn one on lap 13 and paced the final 18 circuits, winning Saturday's Living Legends Dream Race at Port Royal Speedway and collecting $5,000. The victory was Eckert's second of the season at Port Royal.
Quotable: "I can't wait (for the upcoming $50,000-to-win event at Port Royal)," Eckert said. "We finally turned our season around here the last few weeks and got our car to where it needs a little bit, but I think we'll be able to race with those guys and have a shot. I gotta thank him (Steve O'Neil, promoter), because we all know with the way things are right now it's hard to get people in the stands with gas prices. They do a great job here and I'd like to thank all the fans for coming out; I know you're heading out to your cars, but drink a beer for me."
Key notes: After winning with the ULMS at New York's Outlaw Speedway on Friday, third-starting Jared Miley of Pittsburgh, Pa., moved into second place on a lap-20 restart and finished 1.757 seconds behind Eckert. ... Polesitter Dillan Stake of Three Springs, Pa., led the first 12 laps before giving way to Eckert and Miley and settled for third. ... Five-time feature winner and Super Late Model point leader at Port Royal, Colton Flinner of Allison Park, Pa., was running fourth when he lost his right-rear wheel and tire on lap 27. It was a lengthy delay getting Flinner off the track and his team was unable to replace the wheel, relegating him to an 18th-place finish. ... Dylan Yoder and Gary Stuhler took advantage of Flinner's trouble to finish fourth and fifth, respectively. ... Michael Norris quickly moved into third place before slowing and pulling into the infield on lap three, causing him to finish 20th. ... Defending Dream Race winner spun while battling for the win in the third heat race and made slight contact with the turn-three wall; the damage prompted him to scratch for the evening. ... Saturday marked the 16th time Port Royal has hosted the Living Legends Dream Race, which this year honored longtime dirt-track racing videographers Steve Gigeous and Lynn Schaeffer. ... The feature was slowed by two cautions and lasted 20 minutes, with 16 competitors completing all 30 laps.
On the move: Hayes Mattern of Beavertown, Pa., started 15th and finished sixth.
Winner's sponsors: Eckert’s Rocket Chassis is powered by a Jay Dickens Racing Engine and sponsored by PPC Lubricants, Drydene, S.L. Shenberger Dump Truck Service, Firehouse Subs, Suburban Bowlerama, Allstar Performance, M&M Painting & Construction and All About Wraps.
Current weather: Few Clouds, 75°F
Car count: 29
Fast qualifier: Rick Eckert
Time: 18.959 seconds
Polesitter: Dillan Stake
Heat race winners: Jared Miley, Rick Eckert, Matt Cosner
Consolation race winners: Logan Zarin
Editor's note: Results and race details are unofficial.