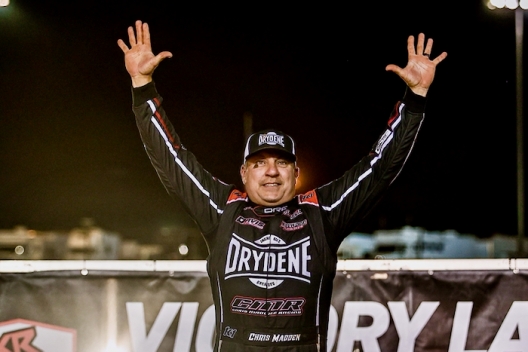 The 46-year-old Gray Court, S.C., driver clicked off his series-leading fourth victory of the season Saturday at The Dirt Track at Charlotte, overtaking polesitter and race-long leader Jonathan Davenport amid traffic with five laps remaining in the revival of the Colossal 100.

Madden added another $50,000 to his XRSS coffers — he's earned $175,000 in winning purses alone — as he carves out what's appearing to be the best season of an already stellar career that includes a track-best eight Super Late Model victories at Charlotte's 4/10-mile oval.

"You know, we're gonna keep doing our work and, you know, everything's still gotta line up perfectly," the fourth-starting Madden said of his pursuit for his most lucrative season. "You've got to have good pill draws, you've gotta qualify good, you've gotta win heat races and put yourself in these positions to win these races — and that's what we've done."

Blairsville, Ga.'s Davenport settled for a runner-up finish, 1.142 behind Madden at the checkers after leading 45 of 50 laps in the finale of a four-race week shortened to three events by Friday rain. Chris Ferguson of nearby Mount Holly, N.C., was third with Brandon Overton of Evans, Ga., and 10th-starting Max Blair of Centerville, Pa., rounding out the top-five finishers in the caution-free Colossal conclusion.

Davenport slid in front of his fellow front-row starting Ferguson on the opening lap and set sail, but Madden took the second spot from Ferguson on the third lap and began a race-long pursuit of the leader. Poised to attack much of the race, Madden moved in to challenge late when Davenport was trying to put a lap on the low-running Brett Hamm. With Davenport hung up, Madden surged to the outside groove and made quick work of the leader, racing to the checkers and adding a victory to his $25,000 preliminary triumph on Wednesday.

Madden recognized the leader is sometimes in peril amid slower cars.

"I've been in that position many times," he said. "You know, we had a really really good race car. Me and him was having a great race right there without lapped traffic. I'd get under him a little bit there and he'd pull me a little bit up off the corner and we could make it back up.

"We had a really good race car to be able to run as close as we did to him in open air and not be (loose). So hat's off to my guys. You know, they've done a heck of a job. It's just awesome to have these races and, and the competition people don't realize ... J.D.'s been tough all year, and we've got Overton and Ferguson, I think he ran third tonight, you know, none of those guys and no slouches those are are great race car drivers and, and they're hard to beat a lot of time. I don't take it lightly to win."

Madden's voice cracked in victory lane in recounting a victory that he hopes helps "keep this thing rolling going into Eldora" for June's Eldora Million in Rossburg, Ohio, with a whopping seven-figure payday on the line.

"That's a pretty intense 50 laps we just ran out there," Madden said. "You know, you can't miss your marks here and you know, I made sure I didn't miss a mark and I run 50 (laps) as perfect as I could and you know just like I said, I can't think my guys enough, a great bunch of people."

Davenport knew he was struggling against slower cars and wasn't surprised Madden was able to find a way past.

"I figured he was gonna do something. The lapped cars held me up there quite a bit and every time they would move their lane a little bit, I would have to move mine. And that would just slow me down even more. But you know, they're out here racing. It ain't their fault," Davenport said. "Congratulations to Madden. I've won a few like that, too, but I've lost a few. It's a hard pill to swallow when you lead it all and get passed at the end.

"He's been awful good this year. He's definitely been one of the fastest cars every time he unloads. We're getting closer, you know. Our car's good. We just needed a little bit of luck right there. Maybe, you know if we'd have gotten by Scott (Bloomquist) a little earlier and got a little clean air when all the other cars started pulling off, we might could've got back away. But you know, there's all kinds of 'what if's' and 'what could've beens.'

Madden "knows where to go and when," Davenport added. "I was trying to stay wide enough to try to kill is air getting in the corner. But when Scott moved down, I was having to enter down below (Bloomquist) and then (Brett Hamm) moved down again and I was having to do the same thing, and I couldn't enter as quite as wide as I wanted to. But like I said, he's smart enough. He knew what to do there and he did a good job."

Ferguson wasn't in the mix but posted a solid third-place finish in the 50-lap finale.

"We had a great run tonight. You know, Chris and Jonathan are two of the fastest cars in the country right now, so to be on the same straightaway, you know, I'm just happy to be in the same ballpark as them." I had a had a good time out there with them. They both race clean and hard and, I don't know, just tickled to have a top three here," he said. "We were close again tonight and we were pretty good all weekend. Just started a little bit too far back in the first two nights, but if I get another one, I promise to put on a show."