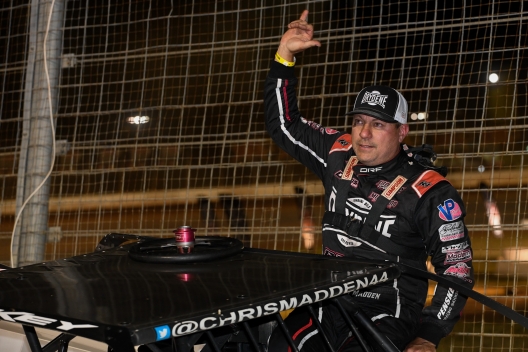 CONCORD, N.C. — The revival of the Colossal 100 appeared to revive two-time race winner Scott Bloomquist on Wednesday at The Dirt Track at Charlotte, but Chris Madden spoiled the Hall of Famer's bid for newfound success at the 4/10-mile oval.

Hugging the inside groove in the final laps, Madden slipped under the polesitter and race-long leader exiting turn two and led the final three laps to grab a $25,000 victory, his tour-leading third of the season on the first-year XR Super Series.

Grabbing the second spot after the race’s lone caution on the 10th lap, Madden closed in on Bloomquist late and had a matter-of-fact description of taking the checkers 0.712 of a second ahead of Bloomquist, who led 27 laps.

“We were good on long runs and we got into lapped traffic there and he got a little loose and we was pretty good,” said the third-starting Madden, who leads XRSS points and scored two series victories at the dirt-covered Bristol (Tenn.) Motor Speedway. “So we was able to get up beside him down the back straightaway and make the pass.”

Bloomquist, who was trying to snap the longest winless streak of his career that stretches back to September 2020, held on to finish second with fourth-starting Jonathan Davenport of Blairsville, Ga., in third. Outside front-row starter Ross Bailes of Clover, S.C., was fourth while Chris Ferguson of nearby Mount Holly, N.C., improved six positions to round out the top five in the 30-lapper.

The same drivers will return to action Thursday and Friday for two more $25,000-to-win programs while Saturday’s finale is scheduled to pay $50,000, matching the payday of the event’s original incarnation in 2006-09.

Madden, who grabbed his first victory at Charlotte since 2019, was glad to get the four-race stretch off to a successful start in utilizing a new powerplant.

"That's pretty awesome,” Madden said. “I've just got to give a big shout out to all the guys that work on my car for me, (and) a big shoutout to Andy Durham ... Durham Race Engines built us a new rocket to come over here and man, he's done an awesome job on this one. So I'd say he's probably gonna have to build me a few more of these.”

Bloomquist, a seven-time feature winner at Charlotte including the 2006-07 versions of the Colossal 100, built a lead of larger than two seconds early in the race, but his car’s handling suffered in the final stages of the 30-lap sprint.

“When I got to traffic I got a little bit loose and the car started scooting a little bit, just getting the air messed up on my car,” Bloomquist said. “So I felt that and I didn't really know how close anybody was. But I definitely would make a few adjustments, you know, knowing what I went through here tonight for the rest of the week.”

Still recovering from injuries suffered in a March 2019 motorcycle accident and subsequent surgeries, Bloomquist thanked his sponsors who’ve “stuck with us through all the accident problems and things that we went through,” he said. “But you know, and I’ve got new guys that are working for me that they seem to be working out well. I think it's gonna end up being a good team. We're just really trying to focus on all these big events coming up.”

Jonathan Davenport, who captured a pair of World of Outlaws Case Late Model Series at Charlotte in last November’s NGK NTK World Finals, saw his winning streak end at the dirt track that’s in the shadow of one of NASCAR’s showplace tracks.

“There at the end, I really wanted to move to the outside just to see if I could roll them or something, but there just really wasn't much (traction) up there, plus a lapped car was just right in the right position to take some air off of (my car),” Davenport said. “So I just sat there and (rode) and (hoped) somebody’d make a mistake and we’d gain one more position. Chris was really good. Congratulations to him, Scott, good to see him running good again

“We'll definitely try to improve on tonight,” Davenport said, looking ahead to three more nights of racing. “We got a little bit behind for qualifying there and just got behind on our changes. I feel like we was pretty good in the heat race. I really don't know what else we could do for the feature there. I felt pretty good, but they was just a little bit better. We’ll still go back and work on it and just try and improve.”