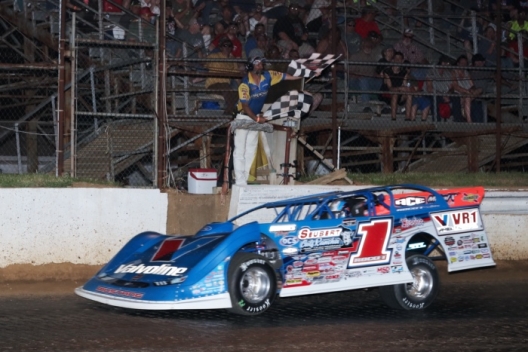 Sheppard grabbed the lead from polesitter and race-long leader Ashton Winger of Hampton, Ga., on the 22nd lap and led the rest of the 50-lap Castrol FloRacing Night in America feature at the 3/8-mile oval for a $22,022 victory.

“It's awesome. And we're having a lot of fun,” said the Rocket Chassis house car driver, who will head to Lincoln Speedway, Farmer City Raceway and Fairbury Speedway for three more lucrative nights of action on the Castrol and MARS tours. “I felt like this was my worst track personally of this four-race swing, so I guess we're all just looking up from here.”

The third-starting Sheppard took the checkers 2.609 seconds head of fifth-starting Mike Marlar of Winfield, Tenn., while Tanner English of Benton, Ky., rallied from his 13th starting spot to finish third. Outside front-row starter Stormy Scott of Las Cruces, N.M., was fourth and 14th-starting Ricky Thornton Jr. of Chandler, Ariz., rounded out the top five on a night when 56 drivers representing more than 20 states packed the pits for Spoon River’s opener.

Bobby Pierce of Oakwood, Ill., appeared to be Sheppard’s worthiest challenger, but he had a scrape with Winger on a lap-36 restart, then slipped over the narrow high groove eight laps later while running second to spin out of contention. He finished 15th.

Winger led the first 21 laps before slipping back to fourth and then running into trouble on the lap-36 restart when Pierce swung too high exiting turn four heading for the green and made contact with Winger on the frontstretch. Winger’s turn-one spin ended his hopes for a top-five run.

Sheppard’s eighth victory of the season marked his lone victory of more than $15,000 since he won $100,000 at Portsmouth (Ohio) Raceway Park’s Dirt Track World Championship in October 2020.

The 29-year-old Sheppard struggled to keep up with Winger and Scott early in the race, but finally found his groove before the halfway point.

“For whatever reason — I think it's just me — I'm not very good at running around the top here,” Sheppard said. “But the past few times we've been here, we've been able to momentum really well. And that's what I was able to find out there. When I was in third, (I found a) good momentum line that I could really come off of turn four real nice and straight and just excelled me to get up there to the lead.”

Sheppard never felt pressure from Pierce, but his fellow twentysomething was tracking him down before a lap-36 caution appeared when Brian Shirley slipped over the turn-four banking.

“(Pierce) does a really great job, and when he's in second you know he's up there ripping the lip,” Sheppard said. “So definitely, you know, when the first caution come out, (crew members) told me I need to go the top (in turns one and two) and I just I didn't feel like I was carrying enough speed up there and I could really cut across this bottom in (turn) one better.

“And once I got a few laps under my belt, then I moved back down and I felt really good. So I don't know if it was just the tires coming back to me or what it was, but it was just a great night, man. Another great night and our car has been really good lately.”

After Pierce’s lap-44 spin, Marlar grabbed second from Scott on the restart but couldn’t keep up with Sheppard.

“Bobby, I (barely) missed him when he went off the edge there. That was really close,” Marlar said. “So yeah, just zigged when I should’ve zagged a couple times, and got second. But no, Sheppy had me covered, that’s for sure.”

English drove his Riggs Motorsports entry from sixth to third on the lap-44 restart to complete a solid rally.

"I hit that bottom right one time and I knew it was fast. I didn't really pass anybody, but I just I knew that it was there,” English said. “So I tried to do it when I got on restarts and I could pass a few cars here and there. This car kept getting better and better.

“I thought, you know, we had a softer tire on there than a few people, and I thought it might have been going away, but it just kept on going and really had a lot more left. It's a great run for us for right now and I can't thank Rocket Chassis enough.”

Many of the same drivers will return to Illinois Speedweek action on Thursday for Lincoln’s Castrol tour event paying $22,022-to-win. The MARS Racing Series sanctions Friday’s $15,000-to-win show at Farmer City and the $30,000-to-win Speedweek finale at Fairbury.

Notes: Sheppard notched his eighth overall victory of the season and sixth in the West Virginia-based Rocket Chassis house car. … Sheppard’s previous Spoon River victories came in 2013 on the DIRTcar Summer Nationals and last season in MARS action. … Sheppard revealed in victory lane that his wife is expecting another child. … Fifth-running Hudson O’Neal went for a spin in turns three and four on the sixth lap, slipping back to 10th. He ended up ninth. … Spencer Hughes of Meridian, Miss., pulled his smoking car to the infield on the 20th lap. … Corey Conley’s car rolled in the second consolation in turn four; he wasn’t injured. …  Among other drivers failing to make the feature lineup: Shannon Babb, Billy Moyer Jr. (who had his hall-of-fame dad in the pit area with him), Tyler Bruening, Chris Simpson, Josh Putnam, Ryan Gustin, Mike Chasteen Jr., Morgan Bagley, Trevor Gundaker, Jake Timm, Kevin Weaver, McKay Wenger and Logan Martin. … Martin broke a J-bar in a consolation race and Wenger was eliminated in a turn-two consy tangle.