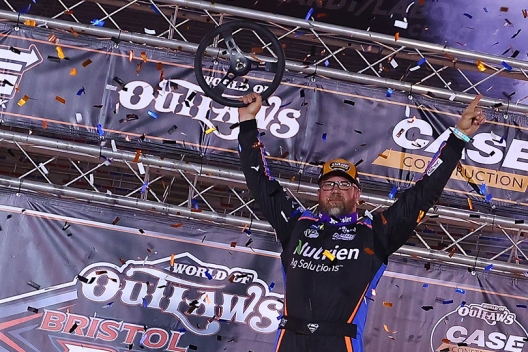 BRISTOL, Tenn. (April 29) — Jonathan Davenport has been on hot streaks before. Look no further than 2015 for evidence. During that historic season, Davenport started a little slow — his third win of 2015 didn’t come until May 21 — before picking up steam.

Larson, meanwhile, slipped from second to eighth on the final lap after tagging the wall hard. The NASCAR superstar, who was also piloting a World of Outlaws NOS Energy Drink Sprint Car on Friday, was slated to start second, but had to rally from the 21st starting spot when he was penalized before the start of the 30-lapper for not making it to the starting grid on time in his K&L Rumley Motorsports Longhorn.

“We just got by Ricky in lapped traffic. Man he's led these things three or four times and got passed in lapped traffic,” said Davenport while thanking his Double L Motorsports crew. “I hate it for (Weiss), but it's great for our team. You know, we finally got that gorilla off our back down in Florida and we’ve been rolling ever since.”

Rolling indeed. For Davenport, the win comes on the heels of Wednesday’s $22,022 Castrol FloRacing Night in America victory at Brownstown (Ind.) Speedway and just six days after his $50,000 triumph in the XR Super Series-sanctioned Florida Dirt Nationals at All-Tech Raceway in Ellisville, Fla. Combined with his runner-up finish behind Larson on April 26 at Ohio’s Eldora Speedway, Davenport has earned $108,022 in a six-day stretch.

While he started Friday’s feature from the third position and never ran outside the top three, it was hardly an easy victory. Polesitter Kyle Hammer of Clinton, Ill., paced the first six laps before giving way to Weiss, who stayed out front for 20 laps.

Davenport moved from third to second on lap nine and trailed Weiss by 0.805 of a second when the second and final caution came out on lap 12. By then, Larson was already up to seventh, a 14-position improvement. Larson passed Hammer for fifth in lap 18 and took the fourth spot from Madden on lap 21. Two laps later he dispatched Bronson to take the third position.

As Larson inched closer to a potential podium finish, Davenport stalked Weiss through traffic. Both Davenport and Larson went by on lap 27, dropping Weiss from first to third. Larson pulled to Davenport’s deck with two laps remaining and trailed by only 0.325 of a second. But that’s as close as he came.

“I’m glad I didn't have a spotter or a mirror. I guess from what everybody says (Larson) was coming really strong up on top,” said Davenport. “But I seen my guy … I could just barely see him and he was pointing to the top and I said, ‘Well here he comes.’ But I didn't know how close he was. It's a pretty awesome feeling winning at Bristol.”

The victory is Davenport’s 11th career with the World of Outlaws and his second at Bristol following his 2021 Karl Kustoms Bristol Dirt Nationals win.

“We seem to excel at these high-banked racetracks, you know, (Volunteer Speedway in) Bulls Gap, Tazewell, these places here in Tennessee are pretty unique,” Davenport said. “So we had some notes coming here and we was good here last year for the XR races and we was decent here earlier in the year for the XR races, just never could put a whole night together. But it's definitely feeling awesome standing up here.”

In finishing second, Weiss was twice the beneficiary of Larson’s misfortune. He was slated to start fourth, but inherited a spot on the front row when Larson was penalized. Weiss was then destined for a third-place finish until Larson’s mishap on the final lap.

“Obviously Larson was really good to come from where he did and I kind of forgot that until the guys mentioned that he was late (to the starting grid),” said Weiss. “You know, it was pretty cool they moved me up (to the outside front row). I just overthought it and screwed up on the start. I thought I gave it away there. Then we we fell back. Davenport got a little aggressive early and it didn't work. We were able to get by him and I just think he had better seat to the show and just made the right choices there in the last few laps and gave him the win.”

While he was never in contention for the victory, third-placed Bronson recorded one of his better Bristol finishes.

“I’ve sucked the last couple times I’ve been here,” said Bronson. “We got a brand-new (Rocket) XR1 out and it has been really good and brand new fresh set of Integra Shocks, brand new Clements engine, you know, everything, ran fawless tonight, you know. We just got to work on it and get steering a little bit better. Larson showed us a way around that top tonight and I think we kind of figured out some things. We just got to turn a little better if we're going to be good up there.”

Notes: Davenport is the 10th different winner in 11 WoO races this season. … His last series win was on Nov. 6, 2021 when he completed a weekend World Finals sweep at Dirt Track at Charlotte in Concord, N.C. … Davenport’s odds of sweeping Bristol went up considerably. “It’s a whole lot easier to win both of them when you get the first one out of the way,” Davenport said. “You know, we'll do all we can. I'm sure everybody will be working on their cars to get them a little faster and we're going to do the same.” … Larson, who was up to 10th by the second lap, was more than miffed when he exited his car following the feature. “It would have been a lot easier if I didn’t have to come from the tail,” said Larson. “I’m the only guy doing double duty here, so there’s a lot of (stuff) I got to get done to get my stuff ready. I’m glad the Outlaws made a good decision there and I could put on a good show for you fans.” … Two cautions slowed the race. Ross Bailes of Clover, S.C., slowed on lap two with a flat left front tire and Brent Larson of Lake Elmo, Minn., slowed on lap 12 after breaking a driveshaft. … Nineteen cars were running at the finish with 15 of the 21 starters completing all 30 laps. … Series leader Dennis Erb Jr. of Carpentersville, Ill., was never a factor in finishing 13th after running as high as 10th. … Erb’s closest pursuer, rookie Max Blair of Centerville, Pa., finished 17th, one lap down, after pitting during the first caution. … Don Hammer of Clinton, Ill., scratched for the night after a crash in prelims.

The Bristol Bash doubleheader kicks off with a rarity for early-season races this year: fine weather. Temperatures reached into the 70s on Friday afternoon with periods of sun, and the chance of rain — both Friday and Saturday — is low. … The weekend marks the first for the World of Outlaws Case Late Model Series since four-time and reigning champion Brandon Sheppard of New Berlin, Ill., and his Rocket Chassis house car team announced their decision to follow the Lucas Oil Late Model Dirt Series for the remainder of the season. With this weekend’s Lucas Oil-sanctioned events at Tri-City Speedway in Granite City, Ill., and Macon (Ill.) Speedway canceled late Thursday afternoon due to dire forecasts of rain and thunderstorms, Sheppard and the Rocket operation could conceivably have switched directions to enter the WoO action but did not make a banzai run to East Tennessee. Rocket owner Mark Richards had said earlier in the week that he would not head to Bristol if the Lucas Oil shows were rained out early because his team would not have enough time to prepare the car they entered in Bristol’s April 1-2 XR Super Series programs. … Nearly half the 22-car field is comprised of drivers who competed in Bristol’s recent XR events: Chris Madden (a winner of two $50,000 races), NASCAR Cup Series champion Kyle Larson, Jonathan Davenport, Scott Bloomquist, Ricky Weiss, Kyle Strickler, Jimmy Owens, Kyle Bronson, Ross Bailes and Tim Vance. … Larson is pulling double duty with a WoO sprint car ride this weekend as well. … WoO rookie Kyle Hammer’s father, Don, pulled out the team’s second Longhorn car to enter the evening’s competition. Alas, Don, a veteran Dirt Late Model racer, slapped the wall during his qualifying run and did not log a timed lap; he limped into the pits with significant right-rear damage and his car had to be towed the rest of the way to the team’s trailer. … How about this for a quirky development: the four drivers in the field named Kyle — Hammer, Bronson, Larson and Strickler — appeared consecutively in the qualifying order and remained grouped together afterward by timing fourth through seventh.