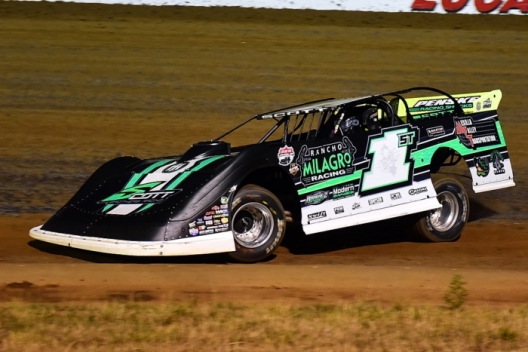 The 32-year-old driver from Las Cruces, N.M., continued to shine at the spic-and-span facility Saturday, earning his third victory of the season on the 3/8-mile with a flawless drive in the 50-lap CMH Diamond Nationals.

Bolting from the fifth starting spot to the lead on the second lap with a pass of Newport, Tenn.’s Jimmy Owens, Scott controlled the remainder of the caution-free distance to earn a career-high $15,000 payday in the Lucas Oil Late Model Dirt Series event.

“It’s a heck of a night,” said Scott, whose previous wins this season at Wheatland came in April 22’s Lucas Oil MLRA Spring Nationals and May 27’s Tribute to Don and Billie Gibson that preceded the Show-Me 100. “I’ve been trying so hard to win these Lucas Oil races, so it’s a relief to finally get (another) one.”

Driving his Rancho Milagro Racing Longhorn Chassis, Scott crossed the finish line 0.678 of a second before Owens, who swapped the runner-up spot several times with Kyle Strickler of Mooresville, N.C., midway through the race before his last-ditch outside charge in the final circuits fell short.

Brandon Sheppard of New Berlin, Ill., finished a close third after overtaking Strickler for the position on lap 45. Mark Burgtorf of Quincy, Ill. — a 16-time champion at his hometown’s Adams County Speedway — recorded a career-best Lucas Oil Series finish of fourth in his third start of 2022 with David Janes’s Longhorn by Wells car while Strickler slipped to fifth in the final rundown after overheating his right-rear tire during his battle with Owens.

Scott, whose brief Dirt Late Model career also includes a June 24 MLRA-sanctioned victory at Lucas Oil Speedway, started the night by registering the overall fastest lap in time trials. He ran into trouble in the first heat, though, when a flat tire on the last lap caused him to lose the win to Strickler — a one position drop that forced him to start the feature from fifth rather than the pole.

But Scott wasn’t bothered by taking the green flag from the third row. He rocketed to the front by the second lap and never relinquished the spot.

Scott led by more than two seconds on occasion during the blazing-fast race, but heavy lapped traffic proved to be a nuisance to him in the late stages. He struggled to pass some slower cars and his advantage shrank as the checkered flag neared, but he kept a cool head to hang on.

“I knew I needed to get around them (lapped) guys, but I knew the top (lane) just wasn’t there so if I just could just run my line and stay consistent I could hold ‘em off,” Scott said. “My (signal) stick guy was telling me they were coming. I knew they (Owens, Strickler and Sheppard) were right there.

Scott, whose only Lucas Oil Speedway blemish this season is his 17th-place finish in May 28’s Show-Me 100, praised his team and twin brother Stormy, who finished 19th in the Saturday’s A-main, for propelling him to his second career Lucas Oil Series win and seventh career MLRA triumph (five coming this year).

The victory was a morale-boosting rebound for Scott, who lost the MLRA points lead in Thursday night’s Lucas Oil Series/MLRA combination event at I-70 Speedway in Odessa, Mo., when broke fuel and power steering pumps knocked him out of action during the pace laps. He regained the top spot in the MLRA standings with his triumph, leaving Wheatland 20 points ahead of 15th-place finisher Chad Simpson of Oxford, Iowa.

“We’re gonna go race at Moberly (Missouri’s Randolph County Speedway) tomorrow (a $10,000-to-win MLRA event), and then we’ll process it all after I-80 and all that,” Scott said when asked if he plans to pursue the MLRA title. “The motor in my car tonight, it’s lapped out, so all I’ve got is one bullet left to get through I-80 (Speedway’s Silver Dollar Nationals on July 21-23) and the rest of the year. Hopefully I can get this one back to Clements and get it freshened and we’ll go from there.”

The 50-year-old Owens tallied his third podium finish in as many nights with the Lucas Oil Series, but he felt he might have let a chance to add another victory to his Lucas Oil Speedway resume slip through his fingers.

“The bottom was so dominant all race. It was really surprising — it’s usually not like that,” said Owens, who led the race’s first lap from the third starting spot. “But we was just trying to get around lapped cars, and I seen Johnny wasn’t pulling those guys and I couldn’t really pass ‘em, and then I seen the 25 car (Chad Simpson) up there running (on the top) and I wasn’t making no ground up on him, so I thought, Well, heck, I’ll get up there and try it. I just got up there about three or four laps too late.

“I had the opportunity to win the race,” he added. “I just slipped up off the bottom and let Johnny get by me (for the lead on the second lap). I knew he was gonna be tough to beat. He’s been good here the last several times he’s been here, so hat’s off to those guys. They deserve a good win.”

Sheppard, 29, ran in fourth for much of the distance until finding grip on the outside of the track to drive his Rocket Chassis house car into third place on lap 45. He didn’t have enough time to gain any more positions.

“It slowed down there a lot at the end and we were able to move out there on the racetrack some,” Sheppard said. “It was a solid night for us. Obviously we wanted to win, but our car was really good. Hopefully we can keep this going.

“We looked at the notes from the last time we were here (for quiet runs during the Show-Me 100 weekend) and just changed a little bit of stuff up and I felt like we were way better. Definitely looking forward to coming back again.”