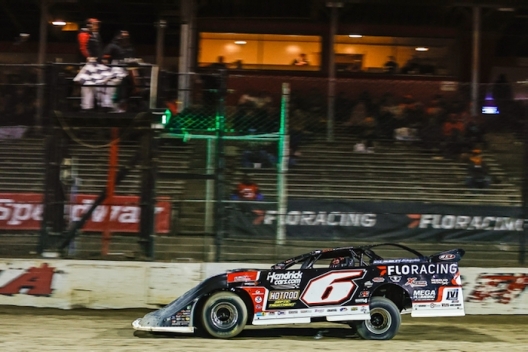 ROSSBURG, Ohio (April 26) — While Kyle Larson had yet to win a Dirt Late Model race during the 2022 season entering Tuesday’s Castrol FloRacing Night in America season opener at Eldora Speedway, the reigning NASCAR Cup Series champion had never ever won in a Dirt Late Model at Tony Stewart’s famed half-mile oval where he’s been quite proficient in everything else he’s driven there.

With $22,022 on the line Tuesday in both the opener for the 13-race series as well as the historic track, Larson went ahead and scratched both items off his bucket list.

Overtaking Jonathan Davenport of Blairsville, Ga., just before the leaders reached lapped traffic on lap nine, Larson of Elk Grove, Calif., dominated the second half of the 30-lap main event on a chilly Spring night in southwest Ohio.

Larson, who had lapped through the seventh-place finisher when the feature’s third and final caution came out on lap 28, easily held on during the final two circuits following the restart. Perhaps a bit more arduous, however, was surviving a rough and tumble Eldora half-mile that underwent new clay surfacing in the offseason and a dousing from Mother Nature just a few days before the event.

Larson started from the pole position, but dropped back to third in the early going before passing both Brandon Overton of Evans, Ga., and Davenport and finishing 1.397 seconds ahead of Davenport, the tour’s inaugural season champion last year. Overton finished third, while Brandon Sheppard of New Berlin, Ill., was fourth and Ricky Thornton Jr. of Chandler, Ariz.

Cautions waved on laps one and 10 as drivers struggled to adjust to the heavy surface.

“I didn't get a good restart (following the first caution),” said Larson. “I chose the top, which I thought was good. I just got kind of trapped in (Davenport’s) dirty air into (turn) one and got tight and allowed Brandon (Overton) to get by. I got by (Overton) pretty easily off of (turn) four (on lap four) kind of diamonding across the holes there. It was easier to do in turns three and four than down in one and two but my car was just getting through the holes way better than, it looked like anybody’s.

“But even when I caught Davenport, there, he was starting to bounce up the track and I could turn across and get some more smooth stuff off of (turn) two, so I was able to clear him there and get the lead. It was a lot of fun through traffic. It was super elbows up, really intense.”

Larson was slicing through what few cars remained when sixth-running Kyle Strickler of Mooresville, N.C., slowed with a flat tire with two laps remaining. The final caution erased a monstrous 5.172-second advantage Larson had built over during an 18-lap green-flag run.

“I don't know where (Davenport) was behind me, but whenever he's behind me, I'm running scared,” said Larson. “So I was running as hard as I could and when that caution came out (on lap 28) I realized that we’d lapped a lot of cars there and got up to the top (six). So the car was obviously really good. It got through the holes really well. Like I said, with Jonathan Davenport behind you on a track like this, that he's really strong on, it makes you nervous.”

Davenport said he thought there was little he could do to keep the NASCAR star at bay, whether in traffic or in clean air.

“(Larson) was just a little freer than we was,” said Davenport, whose runner-up finish comes on the heels of last week’s $50,000 XR Super Series triumph at Florida’s All-Tech Raceway. “He could get turned off the top better to the bottom. I could the first of the race and then I got tighter and tighter.

“I think he passed me right before we got lapped traffic actually, but he done a good job, man. It's definitely rough out there and it was tough. It's tough on the cars and tough on our bodies, but Longhorn builds a great car. Obviously with the top three, it was a good night for them.”

Overton was the third Longhorn driver to cross under the checkered flag. But the 2021 Dream and World 100 winner fell well behind the front duo once Larson raced back by to reclaim the second spot. Overton said it inly took him a lap or two at the top of the track to make him realize he was happier in the bottom groove.

“Man, that (track) was rough as hell,” said Overton. “I seen ‘em up there and I went up there and bounced a couple times and I’m, like, ‘Nah, I better get my ass back down there on the bottom. It’s just how it is man. I’ve worked my whole life trying to get good in the slick and you know, every now and then you’ll see this. Congrats to Kyle and J.D., they done good. I just can’t go through that stuff like they can. I kinda know my limits there. I just got down in the bottom and didn’t tear nothing up and we’ll go on to Brownstown (Wednesday).”

Notes: With his victory, Larson has now won at Eldora in each division he has entered: NASCAR Camping World Truck Series, Super Late Models, Silver Crown cars, winged sprints, non-winged sprints and midgets. “It’s just really cool. It definitely makes me really proud to know that I’ve won in every type of car I’ve ever raced here at Eldora,” said Larson. “This is such a historic track and there's not many people who probably have won here in three or four (different style) cars. I think this is my sixth car I've won in here maybe so, really neat and I love this place.” … With the success Larson has had at Eldora, he said he’s love to race in the June’s Eldora Million, but his best friend is getting married on the same weekend, “so that's a little more important,” Larson said. … … The race was the first at Eldora for new general manager Jerry Gappens in succeeding Roger Slack, who is stepped away after 12 years in the role. … Eldora’s Castrol tour opener was postponed two weeks by inclement weather. ... Eleven of the 22 starters were running at the finish with six on the lead lap. … Tyler Erb of Ohio-based Best Performance Motorsports debuted a new Longhorn Chassis. He finished 10th. ... Sprint car star Tyler Courtney make his Dirt Late Model debut in a Jeremy Bullins-owned Longhorn Chassis, finishing ninth.