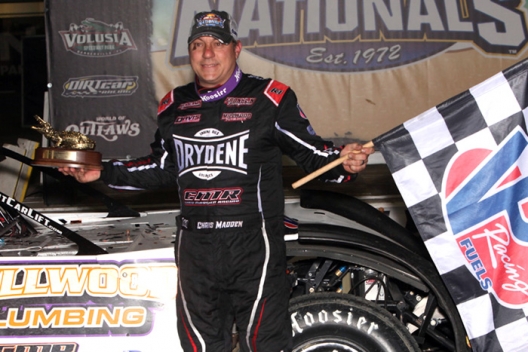 But the 46-year-old Gray Court, S.C., driver's timing couldn't have been better at the D-shaped half-mile as he took command at a key moment and led the rest of the 40-lap World of Outlaws Case Late Model Series main event.

"It was just timing, you know?" said Madden, who swept under polesitter Dale McDowell on the 13th lap exiting turn four and raced to a $10,000 payday that solidified his series points lead. "We've had a great car all week. You know, I've made some bad calls on restarts, picking the wrong line, and I took myself out a couple of wins this week. But overall, we've had a great week and my guys worked their tails off and they've done a great job and I appreciate 'em."

Mike Marlar of Winfield, Tenn., finished 1.261 seconds behind Madden at the checkers after taking the second spot on the final lap while Chickamauga, Ga.'s McDowell, Thursday's winner at Volusia, settled for third after leading the first 12 laps. Max Blair of Centerville, Pa., held the second spot most of the race but slipped back to fourth at the finish, edging fellow WoO rookie candidate Kyle Hammer of Clinton, Ill.

Madden, who captured his second career DIRTcar Nationals victory and first since the 2017 opener, started third in the 29-car field but wasn't initially confident of his chances on a reworked track surface.

"I thought we had messed up there," Madden said. "We made an adjustment (on the car before the race) and they dropped a green flag and I can't keep up. I was like, 'Oh boy, I'm in trouble.' But the racetrack finally slowed down enough to where we were pretty good and Dale and them caught lapped traffic.

"We had nothing to lose but step out there and we found a groove and happened to get by right in time, you know, before (the surface) started rubbering. So it was a big deal to do the move at that point."

Madden went to the outside to grab the second spot from Blair and experimented with that groove on McDowell before dropping back to the bottom for the winning pass. McDowell said he was a "sitting duck" in trying to figure out which groove he should pick while leading.

Marlar, who was battling Madden for the third spot early in the race, took some credit for Madden's success.

"We were actually really good tonight, but Chris was good, too," Marlar said. "Early in the race, he was a little better. I think I got him motivated. I passed him and (then) he moved out and passed the leaders. So it was fun race while it lasted and congratulations to (Madden) and a fun week."

While Madden captured the finale, Devin Moran of Dresden, Ohio, made a 20th-to-12th charge that was good enough for the week-long DIRTcar Nationals title. In picking up the Gator Championship trophy for the second straight season, Moran edged Madden in the miniseries points.

Three cautions slowed the action, the first on the 18th lap when Brian Shirley stopped atop turn four. Another yellow fell on lap 26 for a slowing Chris Simpson and finally on lap 32 when Ryan Gustin slowed and pulled to the infield pits.