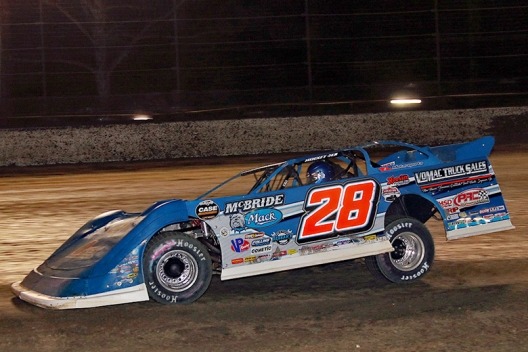 BARBERVILLE, Fla. — The last time Dennis Erb Jr. crossed the finish line first in a feature event at Volusia Speedway Park, the veteran driver from Carpentersville, Ill., made a very rookie-like mistake. Erb didn’t report directly to post-race inspection after the frontstretch victory lane ceremony following that apparent win on Feb. 12, 2020 and was subsequently sent to the back of the finishing order.

There were no such errors on Friday, however, neither on the track nor off. Leading 39 of 40 laps from his outside front-row starting position, the 49-year-old Erb won his 10th career World of Outlaws Case Late Model Series main event. He earned $10,000 in finishing 0.861 of a second ahead of seventh-starting Chase Junghans of Manhattan, Kan., in the DIRTcar Nationals feature, while Darrell Lanigan of Union, Ky., started fourth and advanced one position to finished third.

Brandon Sheppard of New Berlin, Ill., actually took the lead on lap 23 after starting fifth, but gave it back on the next lap before fading over the final 10 laps to settle for fourth place. Thursday’s winner Dale McDowell of Chickamauga, Ga., completed the top five after starting sixth.

Two years after his heartbreaking post-race loss, Erb survived victory lane and the post-race inspection this time. First however, he had to survive a mid-race challenge from Sheppard before holding off a charging Junghans. Erb beat polesitter Frank Heckenast Jr. of Frankfort, Ill., through turns one and two on the opening lap and quickly pulled away.

Erb held a 1-second advantage over Brandon Overton of Evan, Ga., when the race’s first caution appeared on lap 15. On the restart, Sheppard bolted from fourth to second, passing both Overton and Lanigan, and over the next seven laps, proceded to chop into Erb’s lead by riding the high side around the D-shaped half-mile. The four-time series champion pulled even with Erb on lap 22 and grabbed the top spot on the next circuit.

But, staying true to the low line, Erb found enough traction around the bottom and deftly steered his blue and white Rocket Chassis as close as he could to the bright yellow yuke tire exiting turn four to wrestle the lead away from Sheppard on lap 24. When a caution waved for debris on lap 24, Erb was back in first place, a spot he never gave up.

“I was running a line there for a long time and then when (Sheppard) got up on that outside I knew I had to try to carry some more speed so I rolled off through that middle,” said Erb. “It worked real good through there too and we was able to get back out front and pull away there.”

Erb extended the lead to more than 2 seconds over Sheppard by lap 33. Junghans shuffled Sheppard to third on lap 34 and trailed the leader by 1.736 seconds, cutting the lead in half before running out of time as they approached lapped traffic. He finished five lengths behind Erb.

“I knew there were a lot of good cars behind me and it was gonna be close there at the end,” said Erb. “I got into lapped traffic, just trying to maneuver around there and just keep the car under me, and I was just holding on there at the end. We had a good car. We could move around a little bit and I think that’s what was able to get it done for us tonight.

“We had to be patient there. We were getting close to the end and I knew that bottom was pretty good too and I didn’t want nobody slipping underneath me.”

Junghans, who made just his second DIRTcar Nationals start of the season, was pleased with his runner-up finish after placing 17th on Thursday and failing to make features on Tuesday and Wednesday. He said the lapped traffic didn’t help his late charge and that being closer to Erb "halfway through the race" would have helped his cause.

“Just (needed) some clean air. We started hitting those lapped cars and that kinda slowed me down a little bit. Hat’s off to Dennis. He did a hell of a job. Hopefully we can keep it up front now. We’ve been working hard on it all week,” said Junghans, while thanking his crew. “We’re definitely going in the right direction after the first couple nights. I was definitely beating my head off the counter for awhile trying to figure out what this thing needs. If they can get the racetrack like this (Saturday) hopefully we’re getting our picture made.”

Likewise, Lanigan has made steady improvement this week as well. With the exception of laps 19-24 when he briefly ran fifth, Lanigan was never outside the top four. A lap after Sheppard gave way to Junghans, he watched as Lanigan drove by as well. Lanigan was with a second of Erb on lap 38, but dropped back over the final two laps to finish 1.647 seconds behind the winner.

“We had a little bit of a chance there,” said Lanigan. “They was coming back to us a little bit, so, I just got up on the wheel and tried to make something happen. I just can’t run where I want to on the racetrack yet. If we get our car right I think we’ll be able to get up front.”

Notes: Dennis Erb’s 10th career WoO win was his ninth career Georgia-Florida Speedweeks triumph and his second at Volusia. His previous Volusia victory was on Feb. 23, 2012. … It’s Erb’s second Speedweeks victory of 2022. With one race remaining, he’s the only driver to win at both Volusia and East Bay Raceway Park in Gibsonton, Fla., this year. … He said he understood the importance of getting his season off to a good start. “It means a lot to come down here with these group of guys and start the year out and have some good runs off the bat,” said Erb. “To come down here and pick up a couple wins and to win here tonight, that’s very important to get a good start to the year.” … Twenty-five of the 30 starters completed all 40 laps. … Four of the top-five finishers were heat race winners. ... The race was slowed by two cautions: lap 15 for a slowing Ashton Winger and lap 24 for debris. … Four drivers — Josh Richards, Brent Larson, Kyle Hammer and Gordy Gundaker — took emergency provisionals. … Tim McCreadie of Watertown, N.Y., missed the main event after suffering a broken driveshaft in his heat. … After having engine trouble with Wednesday and Thursday, Brandon Overton appeared to bounce back. He ran second for 15 laps and was still in fourth when he pitted with a left rear flat on lap 24. He went back out and made eight more laps before retiring to 28th. … Devin Moran of Dresden, Ohio, finished 10th, his 17th top-10 in 18 Georgia-Florida Speedweeks starts.

Friday’s Round 5 of the DIRTcar Nationals brings another sunny, warm day with the high temperature climbing into the mid-80s. … The usual attrition in the Late Model field as the DCN rolls on appears non-existent this year as a week-high 59 cars are signed in for Friday’s action. … The only changes from Thursday’s roster is the addition of Michael Norris of Sarver, Pa., driving a second car fielded by Jeff Mathews of Brandon, Fla., and a pair of driver swaps (Eli Beets of Knoxville, Tenn., jumping into Stacy Boles’s machine and Chad Walter of Jacksonville, Mo., running the second Reid Millard car that Kaeden Cornell had been running). … Norris has been a DCN stalwart in recent years, but he decided to skip the event this season to save his equipment for other events up north, including trips to Eldora Speedway in Rossburg, Ohio. He made the trip to spectate, however, and while assisting Blake Spencer of St. Augustine, Fla., on Thursday he struck up a conversation with Mathews that led to the Floridian offering him a ride in his second car for the final two nights of competition. … The struggling Josh Richards of Shinnston, W.Va., is driving the Rocket machine that his car owner and teammate, Boom Briggs of Bear Lake, Pa., ran the last three nights. Richards’s No. 1 doors have replaced the No. 99B used by Briggs, who has pulled out the car he piloted in Monday’s opener. … Brandon Overton of Evans, Ga., has pressed into service the Wells Motorsports Longhorn he drove last week at East Bay Raceway Park in Gibsonton, Fla., after terminal engine trouble one lap into Thursday’s feature knocked out the vehicle he raced to victory on Wednesday. Overton’s car owner, David Wells, also reported that upon further examination it appears the engine problem that cropped up as Overton was completing his Wednesday triumph might have only been a busted oil line rather than a serious malfunction.