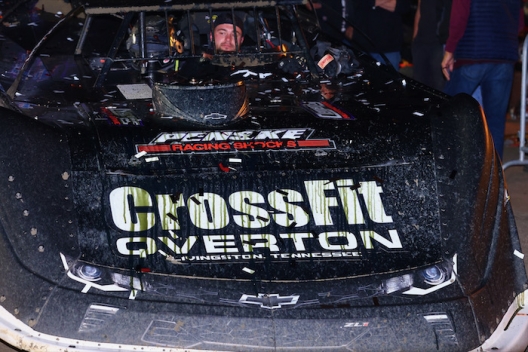 BARBERVILLE, Fla. — First Brandon Overton smoked the field with a third-to-first move on a lap-15 restart. Then he survived a smoking engine to hang on for a $10,000 victory.

The 30-year-old Evans, Ga., driver barely turned back a late charge from Devin Moran on Wednesday at Volusia Speedway Park for a World of Outlaws Case Late Model Series triumph in the third round of the 51st annual DIRTcar Nationals.

"It won't run no more, that's for sure," the eighth-starting Overton said after his No. 76 Wells Motorsports machine was pushed to victory lane. "I could see it smoking and I kept looking, and I was like, 'Damn, I know it's gonna be over pretty soon.' "

Overton took the checkers eight-tenths of a second ahead of Dresden, Ohio's Moran while 25th-starting Brandon Sheppard of New Berlin, Ill., the four-time and reigning WoO champion who went to a backup car after his heat race, rallied to finish third. Hudson O'Neal of Martinsville, Ind., and Darrell Lanigan of Union, Ky., rounded out the top five in the first of two WoO features scheduled for the night. (Another 40-lapper was scheduled for later in a program, a makeup from a Jan. 22 rainout at Volusia's Sunshine Nationals.)

Three contenders departed after drawing cautions, including pole-starting Kyle Strickler of Mooresville, N.C., who led the first 15 laps but broke a lower jackshaft and was pushed to the pits during the caution period.

Mike Marlar of Winfield, Tenn., was running second when a lap-six flat tire ended his race and Dale McDowell of Chickamauga, Ga., was third when he spun in turn two after contact with Chris Madden and retired.

Strickler appeared to have the car to beat early, but his demise handed the point to McDowell for the ensuing restart. But McDowell never officially led a lap as Overton's high-side charge carried him into the lead on the backstretch and he led comfortably through the caution-plagued event until his late-race engine woes.

"I was just holding (the accelerator) on the floor and I could tell it was dying ... Hell, there ain't nothing you can do. It's already done its damage," Overton said. "But man, it just feels so good to be back up here. I was starting to wonder, 'Hell, am I gonna win another race before we leave Florida?' At least we got one done."

Overton notched his third Georgia-Florida Speedweeks victory — but first since Jan. 29 — as he tries to continue his success from last year's 31-victory campaign that paid him nearly $1 million in earnings.

"We've changed everything on this thing every single night, every feature we've ran," Overton said. "The new body rules and all that stuff just kind of got us, got us in a little box and we've just got to figure it out. I had a pretty good package (last season) with the way everything was, and it's kind of changed it a little bit, but we'll just keep working. That's what makes this deal fun. You gotta keep after so we're looking forward to it."

Moran knew Overton was having issues in the final laps, but he never got close enough to take a serious stab at the lead.

"I felt like I was catching him before that. I don't have it was because the motor was getting worse or worse, but obviously (it) started smoking in the last couple laps," Moran said. "I wasn't going to try to slide him in (turns) three and four, because I knew I was too far back. But I wanted to at least run a different line if he did blow up or whatever happened."

After Tuesday's runner-up finish, "I'm just tired of running second," Moran added, "so we just got to work on this thing and maybe we can get it done."

"Man, my team just comes through in tough times like we had today," said Sheppard, adding the decision to switch cars paid off. "This car's really good and all of our cars are good. We're just missing something on that other one and we got this one out and it's really good right out of the box. So I'm pretty amped up for the rest of the week."

Besides the yellows for Strickler, Marlar and McDowell, four other cautions slowed the action. A Josh Richards spin in turn four that forced a complete restart and a second-lap yellow when Cade Dillard slowed and headed pitside.

Kyle Hammer spun inside turns one and two for a lap-20 caution and Garrett Smith drew a quick yellow on the ensuing restart with a broken driveshaft.

Notes: Overton has 19 career WoO victories. ... Chris Madden of Gray Court, S.C., briefly edged ahead of Strickler on the lap-six restart, but slipped back to third a lap later and ended up sixth. ... Tuesday's DIRTcar Nationals winner Ryan Gustin was the first retiree. ... Ricky Thornton Jr. was leading the fourth heat when he slowed with a puff of white smoke and headed pitside; the broken motor ended his night. ... Daulton Wilson led early in the second heat but had problems the rest of the way, first hitting the outside wall and then spinning into the inside wall. ... WoO series director Casey Shuman said the series would no longer exceed 28 starters for main events after some unwieldy fields in recent seasons, but emergency provisionals grew Wednesday's starting field to 30.

After Tuesday’s three-division, rain-delayed program ran until the wee hours — final checkered flag: 2:08 a.m. — Wednesday’s schedule includes the first full World of Outlaws Case Late Model Series card of the week, DIRTcar big-block action and a second WoO feature held over from last month’s Sunshine Nationals. … A short period of rain hit Volusia Wednesday morning and lasted until shortly after noon, but skies had largely cleared by the start of hot laps. Wednesday’s high temperature hit 70. … Fifty-eight cars are signed in for Wednesday’s regularly-scheduled WoO card. … Making their first starts of the 2022 DIRTcar Nationals are Hudson O’Neal of Martinsville, Ind., and Kaeden Cornell of Willard, Mo. … Kyle Bronson of Brandon, Fla., has pulled out his second car after the engine in the machine he entered on Tuesday broke during heat action. … Shane Clanton of Zebulon, Ga., swapped motors in his Skyline Motorsports car after discovering trouble following his victory in at Tuesday B-main. He started the feature but retired after a handful of laps. … Ashton Winger of Hampton, Ga., has two G.R. Smith-owned Longhorn cars unloaded for Wednesday’s racing. He’s running the car he drove on Monday in the full WoO program while reserving the No. 89 he piloted to a fourth-place finish on Tuesday for the held-over A-main, which he is scheduled to start from the outside pole. … Hall of Famer Scott Bloomquist of Mooresburg, Tenn., isn’t competing in any Speedweeks events this year, but he’s in the Volusia pit area assisting Team Zero customer Mike Benedum of Salem, W.Va. Bloomquist made arrangements for Benedum to move his hauler, which was parked in the far reaches of the lower Gator Pond pit area, to the upper pits alongside Team Zero campaigner Dale McDowell of Chickamauga, Ga., who starts from the pole in this evening’s held-over feature. … Josh Richards of Shinnston, W.Va., has a familiar face in his pit area this evening: Matt Barnes, who spent several years at Richards’s head wrench with the Rocket Chassis house car team. Barnes, who lives in Baltimore, Md., and provides mechanical assistance to regional racer Kyle Lee at selected events, is helping Richards’s Boom Briggs-owned effort.