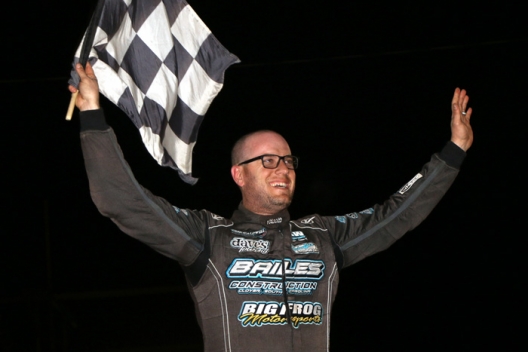 SYLVANIA, Ga. — Nobody remembers who finished second. And Ross Bailes was so determined not to finish second Saturday at Screven Motor Speedway that he skipped holding that position altogether.

The 32-year-old Clover, S.C., made a nifty third-to-first move exiting turn two on the 12th lap of the 40th Southern All Star Racing Series opener and rolled to a $10,000 Winter Freeze victory at the 3/8-mile oval.

Amid lapped traffic as Bailes chased early leader Brent Dixon and reigning Southern All Star champ Payton Freeman, "it got kind of sketchy there," Bailes said. "But they left me the top and I took it and I was able to get by 'em before the caution came out."

Indeed a lap-13 caution slowed the action, but Bailes wasn't challenged the rest of the 50-lapper in capturing his second career Southern All Star feature and first since capturing 2017's season opener at Cherokee Speedway in Gaffney, S.C.

Bailes took the checkers three seconds ahead of Pearson Lee Williams of Dublin, Ga., who improved five positions for a $5,000 payday. Surprising entrant Rusty Schlenk of McClure, Ohio, drove a John Nicholson-owned car to a third-place finish while Commerce, Ga.'s Freeman and Colten Burdette of Parkersburg, W.Va. rounded out the top five. Dixon, who started on the pole and led 11 laps, settled for sixth.

While Dixon pounced into the early lead, he soon had his hands full with Freeman. When the low-running frontrunners came upon the slower car of Shay Miller, the third-running Bailes saw an opportunity.

"That's one of those cases where it's just better to be in second or third so you can see what they're doing and what you need to do," Bailes said. "And luckily, like I said, Payton started pressuring Brent there on the bottom, and they left me at the top and I was able to take advantage of it."

Bailes had to navigate slower cars in the second half of the race, but never appeared in danger despite Williams, who took second from Freeman on lap 27, cutting the margin to less than two seconds with 10 laps remaining.

Williams was pleased with his seventh-to-second run for Wynn Motorsports.

Schlenk, a northern Ohio-based owner of Domination Race Cars who makes occasional Southern racing trips, headed to Georgia to assist customer John Nicholson. He ended up driving Nicholson's No. 63 to a podium finish.

"They bought it from me this year and we haven't had it on the racetrack yet, so I come down to test with them on Thursday and everything went pretty good," Schlenk said. "So they decided to throw me in the car for tonight and let me have some fun down here. So we figured we'd stick around and try it. We had some had some good luck last time (with the Southern All Stars).

Three cautions slowed the action, all in the first 13 laps. The first appeared on the first attempted start when Dalton Cook and Matt Dooley tangled on the backstretch. A lap-two caution appeared for Brian Nuttall Jr.'s spin exiting turn two and Todd Brennan drew a lap-13 yellow flag in turn four.

Notes: Bailes is coming off a nine-victory season that included two five-figure paydays. ... Half the Screven's 22 starters completed 50 laps. ... The Southern All Stars return to action March 6 at Cherokee for the $10,000-to-win March Madness event.