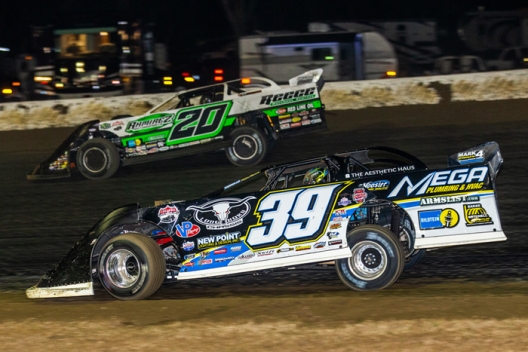 Leave it to Jimmy Owens of Newport, Tenn., to spoil the party.

Capturing the finale of All-Tech Raceway's General Tire Winter Nationals presented by Line-X as the frontrunners dueled amid traffic, Owens dispatched the pole-starting Moran on lap 42, then grabbed the lead from McCreadie on lap 43 and raced to a $15,000 at the slippery 4/10-mile oval.

Reaching victory lane for the first time since September, Owens deadpanned in victory lane that "it was fun racing up front for a change" after starting the season with six Lucas Oil runs of 10th or worse.

The driver who turned 50 two days earlier grabbed his 78th career Lucas Oil Series victory in taking the checkers 2.841 seconds ahead of McCreadie, the Watertown, N.Y., driver who rallied from 11th to grab the lead after 15 laps before settling for second in a race with five lead changes among four leaders.

Moran took the lead from Erb on a lap-eight restart, but the charging McCreadie was quickly in the mix and took over on lap 15. As the 50-lapper entered the middle stages, it appeared another showdown was brewing between McCreadie and Moran, who slammed together exiting turn four on the final lap Monday at Bubba Raceway Park in Ocala, Fla., with McCreadie dramatically regaining the lead and grabbing a victory.

Six nights later at All-Tech, Moran slid ahead on the 29th circuit to regain the point, but McCreadie quickly answered on lap 30 as the frontrunners desperately sought the best groove to maneuver past several slower cars.

Suddenly the third-starting Owens found his way into the mix, snagging the second spot from Moran on the 35th lap while McCreadie stayed in command. Moran took second from Owens on lap 41, but Owens quickly regained the spot and when McCreadie dropped to the low groove a lap later, Owens sailed into the lead and pulled away.

"It was just a tricky track tonight. There was a lot of grooves in different areas and you just had to slide in the right spot," Owens said, dedicating the victory to team owner Leon Ramirez. "But the car was working good, I was able to keep up with the guys, especially when we got to lapped traffic. With a track like this, when you're out front like, you're kind of a sitting duck because the (pursuers) can move around."

"It's always awesome to come down here and get a win," he said. "This is one of our better tracks in Florida. We do a little better here, which isn't very spectacular ..."

McCreadie kept his head up in victory lane, knowing how poorly his night started after struggling in Thursday's All-Tech action.

"The other night were really bad and we just put our heads together today and we ran three different setups from hot laps to qualifying to (the heat race). We found one thing that seemed to help and hats off to all my guys. ... this was all them," McCreadie said. "I sat back after hot laps and said 'I really don't even know what to tell you. I get around here not as good as I'd like to. I can't work my gas and (brake) right, so it's time for you guys to do what maybe I would do to help this car like what do you guys say?' And (they)  put their heads together and every decision they made is the reason we're up front."

Davenport duplicated his third-place finish from Sheppard's victory Thursday, but he was fortunate to avoid an early spin by Tyler Bruening.

"We was just lucky to be there at the end. We had a scare with Bruening and Erb (when they) got together there," he said. "I think I hit Bruening in that tire at the same time when I slid by there, but we just got lucky there.

"But our car was pretty good. We fell back early. I just got the wrong line and I picked up a huge push off one of the restarts and almost got into the wall and let three or four get by me. But we battled back and our car was really good and clean air and it's just, you know, we run Jimmy back down there at one time and Timmy, but they got through the lapped traffic a little better than we did.

Two cautions appeared on the 10th lap when O'Neil spun again and then Mark Whitener's smoking car slowed on the ensuing restart.

The fifth caution appeared a few laps later for the fourth-running Tyler Bruening, who spun while battling Erb. Bruening had run as high as second in the early laps.

Jake O’Neil of Tucson, Ariz., won his consolation race to transfer into his first feature of Georgia-Florida Speedweeks. … Brennon Willard of Lebanon, Mo., joined the field Saturday. Willard was on the property Thursday, but did not compete. … Also joining the program was Ryan Gustin of Marshalltown, Iowa, who has started three Georgia-Florida Speedweeks events this season with a best finish of 13th. …. Dalton Cook of Columbus, Ga., was at All-Tech on Thursday, but left Friday and headed to the Southern All Stars event at Screven Motor Speedway in Sylvania, Ga. … For the second night in a row, Fayetteville, N.C.’s Daulton Wilson is piloting the car normally driven by Justin Ratliff. Wilson won his consolatioin race. … Garrett Smith of Eatonton, Ga., smacked the turn two wall during time trials, damaging a plethora of chassis components, including his car’s J-bar, lift-bar and driveshaft. … Mother Nature continues to play jokes on Speedweeks’ competitors, specifically carburetor tuners. After a balmy 83-degree day on Thursday and a rainout on Friday, Saturday’s temperature peaked at 54, with an occasional rain shower passing through. … With Friday’s event getting rained out early, Mark Whitener of Middleburg, Fla., made the three-hour trek to East Bay Raceway Park, finishing 12th in the Crate Racin’ USA feature.