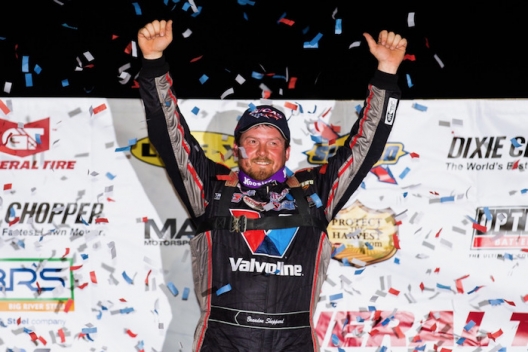 Leading all but one circuit of the 40-lap General Tire Winter Nationals opener, Sheppard marched to his first win during the Southeast’s annual stretch of racing since February 2020. He briefly ceded the lead to Ricky Thornton Jr. of Chandler, Ariz., on lap seven but controlled the remainder of the distance to pocket the $10,000 top prize in the first of three nights of Lucas Oil Late Model Dirt Series action at the 4/10-mile oval.

“Glad to get our first win off our backs,” a relieved Sheppard said in victory lane after snapping an uncharacteristic 25-race Speedweeks winless streak dating back to a World of Outlaws Morton Buildings Late Model Series triumph on Feb. 12, 2020, at Volusia Speedway Park in Barberville, Fla.

Winless through his first six starts of Speedweeks 2022, the 29-year-old superstar from New Berlin, Ill., broke through by beating Devin Moran of Dresden, Ohio, to the finish line by 1.802 seconds. Moran grabbed his fourth runner-up finish in six Lucas Oil Series events on the final lap when Jonathan Davenport of Blairsville, Ga., slowed drastically off turn four with apparent electrical trouble, forcing him to settle for third place.

Shane Clanton of Zebulon, Ga., finished fourth after starting third and slipping as far back as seventh early in the A-main. The polesitting Thornton, who nosed ahead of Sheppard to lead lap seven, fell to fifth in the final rundown after running second until losing three spots following a lap-37 restart.

Sheppard entered All-Tech’s program with three top-five finishes on his Speedweeks resume so far this year, but he and his Mark Richards-led team resolved to make a change in their strategy in hopes of getting over the hump. It appeared to work as he was the night’s fast qualifier, won his heat race and came off the outside pole to lead 39 of the feature’s 40 laps.

“We just stopped messing ourselves up,” Sheppard said. “I feel like we’ve been over-adjusting a little bit. We had a good car all night long, and then we think we’re making ourselves better for the feature and then we always seem to be just a little bit off. So we kind of came into tonight thinking we weren’t gonna change quite as much and it really paid off.”

After Sheppard turned back Thornton’s early challenge, the four-time WoO champion was never seriously threatened again aside for a momentary mid-race spell when lapped traffic allowed Thornton to close within striking distance. Once Sheppard had open track he was untouchable, pulling away to a nearly 3-second advantage before the feature’s final caution flag, on lap 37, tightened the field.

Sheppard’s path to the 22nd Lucas Oil Series victory and 17th Speedweeks triumph of his career wasn’t uneventful, though. He never was able to relax as he battled to tame the difficult All-Tech conditions and had to withstand a three-lap dash to the checkered flag.

“I was honestly just hoping that everybody was having as hard of a time steering as I was out there,” Sheppard said. “Man, this track is so tricky. It’s super slippery and the brown spots got a lot of grip to ‘em.

“It was definitely stressful for me. I thought for sure the last restart that one of them guys was gonna come cruising by me on the outside, but I guess they were having the same issues I was.”

Thornton didn’t have anything for Sheppard following the final restart — he said he simply couldn’t steer his car as the track slowed down in turns one and two late in the distance — but Davenport appeared capable of a last-ditch bid when he swung around the outside of Thornton to snatch second. Davenport hopes were dashed, however, because ignition trouble in his Lance Landers-owned Longhorn car sapped it of the strength necessary to mount a challenge.

“It started right before that last caution,” Davenport said of his mechanical woes which cost him second place on the last lap. “I think something electrical went wrong, I don’t know if we got a ground loose or whatever, but it started popping real bad. Under that caution it wouldn’t hardly run at all and I was flipping all kinds of switches just trying to get something to work. It made it almost to the checkered flag, so at least we finally got us a podium run.

“I would’ve like to run those last three laps at full power because I found a little bit through (turns one and two) and passed Ricky and I even gained on Brandon a little bit, but the one part where I needed a little bit of power it just wasn’t there. It was missing too bad.”

The 27-year-old Moran — the Lucas Oil Series points leader entering the event with two wins and three runner-up finishes in the tour’s first five races — benefitted from Davenport’s hiccup to keep his streak of top-two runs alive. His final-turn pass of Davenport completed an impressive advance that saw him steer his Tye Twarog-owned Longhorn forward from the 15th starting spot and shoot from fifth to second following the lap-37 restart.

“You just had to be patient,” Moran said. “It was wild out there. We all ran the bottom for the first it felt like a hundred laps because it was such a slow pace. Then we started throwing them crumbs out and we could finally move out on the track just a little bit.

“It was so sketchy, it was like East Bay where you have no tires. It’s just like racing a four-wheeler on a pond of ice, so I just had to make sure I didn’t make too many big mistakes. I feel bad for (Davenport), but that kind of got us a second.”

Four caution flags slowed the race. Joseph Joiner was involved in three of them, tangling with Earl Pearson Jr. on the original start and spinning on laps four and 37. Mark Whitener triggered the other caution when mechanical trouble caused him to slow on lap nine and retire from the race as he ran in fifth.

Brilliant sunshine and a high of 83 degrees welcomed competitors to All-Tech following Wednesday’s off day. That’s 51 degrees warmer — yes 51 degrees — than the tour’s finale at Golden Isles last Saturday. …  Devin Moran of Dresden, Ohio, has won two features and has three runner-up finishes. If Moran wins six more Lucas Oil Series events of the final nine, he will claim a $20,000 bonus. He’ll pick up a $100,000 bonus if he wins eight of the final nine, beginning with tonight’s race at All-Tech. … During his time trial effort, the laps of Dennis Erb Jr. of Carpentersville, Ill., were impeded by a slower car as determined by Lucas Oil officials. Erb was awarded two more laps and promptly set the overall time of 17.107 seconds. That held up only temporarily as fellow Illini driver Brandon Sheppard of New Berlin, set the overall fast time (17.087) just seven cars later. … Carson Ferguson of Lincolnton, N.C., is making his Lucas Oil Series debut. … Jimmy Owens of Newport, Tenn., picked up a $26,000 Crate Late Model victory at All-Tech on Oct. 23. Ferguson was second in that race, while Kyle Bronson of Brandon, Fla., finished third. … Jake O’Neil of Tucson, Ariz., is making a return to Late Models for the first time in six years. O’Neil has been racing modifieds.