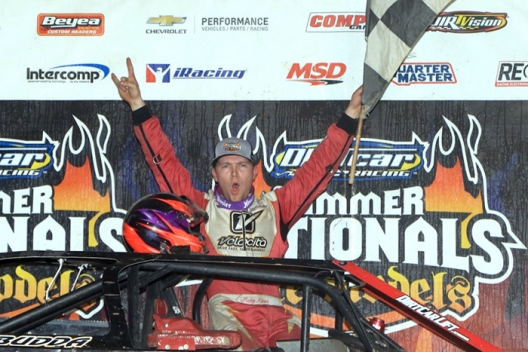 Overcoming his struggles during Friday’s preliminary action, Pierce charged forward from his fifth starting spot to take the lead on lap 12 of Tri-City’s Russ Wallace Memorial main event and never looked back. The Oakwood, Ill., driver cruised through the remainder of the caution-free race to earn $10,000 for his 10th Summer Nationals victory of the season.

Pierce took the checkers 3.603 seconds ahead of polesitter Ryan Unzicker of El Paso, Ill. Ashton Winger of Hampton, Ga., was third, Tanner English of Benton, Ky., fourth and Shannon Babb of Moweaqua, Ill., was fifth, the final car on the lead lap.

The dominating performance by Pierce came after he struggled to find his rhythm during the night’s time trials and heat races and after he and his crew had to thrash to get his car ready in time for the feature.

“Really we were lucky to start fifth,” said Pierce, who earned the 37th Summer Nationals victory his career and his third series victory at Tri-City. “We had issues in qualifying, but luckily that first lap was just good enough to start third in the heat. Got second in the heat and started fifth (in the feature). We had so much stuff to do from qualifying to the heat race with the issues we had. Luckily we got it all turned around because what could’ve been a really bad night was the best it could’ve been.”

Pierce’s victory headed off what could’ve been a stretch of racing ideal for second-in-points English to start a comeback in the tour’s $25,000 title chase. English outdueled Pierce to win the tour’s first visit to Tri-City on June 18, and Friday’s event led into three more nights of racing at tracks favorable to English in Clarksville (Tenn.) Speedway, Richmond (Ky.) Raceway and Lake Cumberland Speedway in Burnside, Ky.

But Pierce found Tri-City much to his liking by the time Friday’s feature rolled around and he didn’t give English or anyone else a chance to even sniff victory.

“This is a long week for us and to start the week off with two wins is awesome,” said Pierce, who triumph at Tri-City followed his Thursday night victory at Springfield (Mo.) Raceway. “That was like old Tri-City there to a T. When I grew up racing here, that’s just how it was. It just fit my driving style to a T.”

Second-starting Mitch McGrath of Waukesha, Wis., led the race’s first 11 laps before Pierce roared by with a hard charge into turn three on lap 12. McGrath faded from there, ending up a lap down in seventh.

The tour heads to Clarksville on Saturday for a $10,000-to-win event before invading Kentucky on Sunday and Monday for $5,000-to-win events at Richmond and Lake Cumberland.

Notes: The 40-lap race ran caution-free and took just over 11 minutes to complete. … Pierce dedicated his victory to Easton Crady, a young fan from the area who died earlier in the week. … Pierce’s previous Summer Nationals victories at Tri-City came in 2020 and 2016. … The B-main was a bit of a mess at the finish with the white flag appearing twice, once with three laps to go and again with one lap to go. Drivers appeared to let off the gas with two laps to go, thinking they'd taken the checkers, but eventually got back up to speed. Billy Laycock won the consy with Daryn Klein, who led most of the way, getting into the wall in turns three and four before the first white flag appeared.

Tri-City is just the second track in tour history to host two non-consecutive events in the same season. Fairbury (Ill.) Speedway did it last season. ... Fast qualifier and third heat winner Shannon Babb is back on the tour for the first time since his 100th tour victory at Farmer City (Ill.) Raceway. A victory at Tri-City would also be a milestone victory as it would break his tie with Billy Moyer as the winningest all-time series driver. .. In tribute to the Wallace family at the Russ Wallace Memorial, brothers Gordy and Trevor Gundaker drove No. 6 and No. 7 throwback cars. ... The second heat was the lone heat with caution flags (besides called-back starts), all three on the sixth lap. Reid Millard got sideways into turn one for caution, then Jeff Roth and Matt Zimmerly were part of a caution on the restart. Millard spun again in turn four for the final yellow. ... Tim Lance Jr. was entered but never hit the track for a competitive lap at Tri-City; the team didn't have equipment to make repairs after the previous night's rollover accident at Springfield (Mo.) Raceway. ... The series has officially added Highland (Ill.) Speedway's makeup event for Aug. 13, the night before a previously announced makeup event at Federated Auto Parts Raceway at I-55 in Pevely, Mo. Both events pay $10,000-to-win.