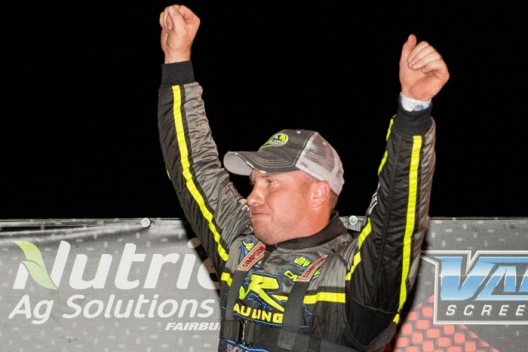 FAIRBURY, Ill. — Frank Heckenast Jr. had been looking for a signature victory for years at Fairbury Speedway. The Frankfort, Ill., driver did better than that in Saturday's FALS Frenzy.

Overtaking polesitter Gordy Gundaker with 17 laps remaining, Heckenast raced to a $15,000 victory in the caution-free 50-lapper, his first five-figure payday at the quarter-mile oval and the richest victory of his career overall.

Heckenast tracked the low-running Gundaker through the middle stages of the unsanctioned event before jumping to the high side and rolling to victory, his fourth of the season, second at Fairbury and third playing at least $10,000.

"I just seen them lapped cars pinching (Gundaker) down there, and I was like, 'I'm not going to take another second.' I'd rather (fall back further) than run second," Heckenast said. "So we went for it and it worked out."

Outside front-row starter Brandon Sheppard of New Berlin, Ill., winner of the previous two FALS Frenzy events, dropped Gundaker to third with four laps remaining but finished a distant 3.474 seconds behind Heckenast at the checkers.

St. Charles, Mo.'s Gundaker, who took the lead from Sheppard on the fourth lap and led through lap 33, settled for third while Ryan Unzicker of El Paso, Ill., and 10th-starting Tanner English of Benton, Ky., rounded out the top five in Fairbury's season finale.

Heckenast, whose previous richest victory came with a $12,000 purse in the Oct. 17, 2015, Deep Fried 75 at Duck River Raceway Park in Wheel, Tenn., wasn't certain he had the car to give him his first Fairbury five-figure payday starting fourth in the 50-lapper.

In victory lane, he detailed the team has "just been so close, and then we've won the $5,000s and the $2,500s. We just couldn't ever get $10,000s," Heckenast said. "We were always wrong on tires and choosing tires and everything else. Tonight, I really thought we put the wrong tire on when we pulled out then. Then I watched Gordy take off, and I'm like, 'All right,' because I think me and him had the same tire on."

Heckenast held fast in the fourth spot the first 19 laps and then began edging closer to the leading Gundaker as traffic — especially in the low groove — hampered the frontrunner.

"I feel bad for Gordy. Me and (Shannon) Babb talked about this, this is the worst place to be leading. You don't know where to go and what's going on (behind you)," Heckenast said.

Gundaker knew he was in trouble when Heckenast was able to transition to the higher groove and roll past on lap 34.

"We were really good there at the beginning of the race, and when I had clean track, I felt like I was just in a good rhythm. It started to get a little choppy down there in (turns) one and two, and that kind of messed me up," the third-place finisher said. "Just when we got to those lapped cars, I was pretty committed to the bottom where Frankie and Brandon could maneuver a little bit better. Lapped traffic's the name of the game. I was really hoping we were going to get a yellow somewhere at the middle part of the race where I could get some clean traffic, but all in all, we've come a long way this year.'

Sheppard, gunning for a FALS Frenzy threepeat, simply wasn't as good as Heckenast.

"He did a really good job. Congratulations to him and his team. They deserve it for sure, they've been working hard," said Sheppard, who drove his family-owned car. "The B5 was really good like it has been for the past few years. It just, I think I was just a little bit tight getting in (to the corners) tonight, but if that's the only thing I've got to complain about, I'm not going to complain about it. You're not going to win 'em all. My car was really fast.

"All in all, it was a really good night. Best we could do, so we're going to work on this thing and hopefully get it right for New Mexico (and 2022's Wild West Shootout at Vado Motor Speedway)."

Heckenast, his wife due with their first child near Thanksgiving, thanked his sponsors, crew and family in victory lane. "It's really cool to get a win for them," he said.

"This place is so hard to win at. (Promoter) Matt (Curl) does a great job and everybody and DirtonDirt.com and (announcer Mike Norris) and everyone that works here, this place has been building up for years, everyone knows that ... this is one of the races I wanted to win. I'd rather win this than a $20,000 just because of the prestige of this race and this place. ..."

Notes: Heckenast also won a $5,000 feature June 3 at Fairbury. ... Nine drivers finished on the lead lap and 18 of 21 starters were running at the finish. ... The first retiree was hometown driver Jeff Curl, who earlier announced the race would be the last of his 20-year career. The three-time modified track champion has competed in Late Model the last four seasons. 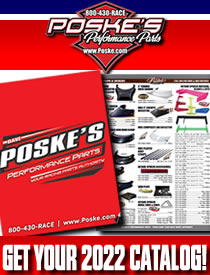