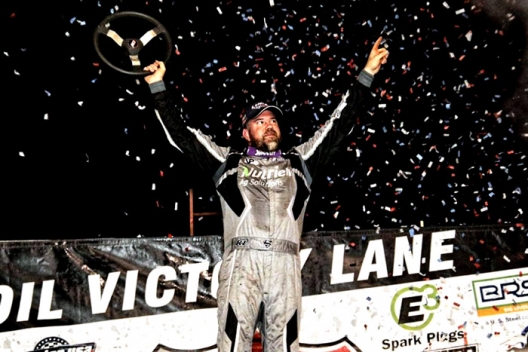 WOODSTOCK, Ga. (Oct. 9) — The sense of satisfaction that swept over Jonathan Davenport after his convincing $15,000 victory in Saturday night’s 50-lap Dixie Shootout was evident with every word that tumbled from his mouth.

“Man, I’ve wanted to win here for so long,” Davenport said of Dixie Speedway, the best-known dirt track in his native Georgia. “It’s been a long time coming, but it definitely feels great.”

Davenport, 37, of Blairsville, Ga., made his coveted first-ever triumph at the 3/8-mile oval owned by the Swims family a dominant one, leading from flag-to-flag off the pole position without facing a single serious challenge. He built an edge of over 4 seconds before three caution flags in the last six laps shrank his winning margin to a more modest 0.929 of a second over Brandon Overton of Evans, Ga.

Overton reached second place on lap 30 and was right behind Davenport on each of the final three restarts — including a final one on lap 49 — but the country’s No. 1-ranked driver couldn’t even threaten his No. 2-ranked rival as he settled for the runner-up money in the Lucas Oil Late Model Dirt Series-sanctioned event.

Davenport was absolutely in a league of his own for the entire distance, easily controlling the action during the long green-flag stretch (laps 7-44) and the late-race restarts.

“My car was just really, really good there,” Davenport said of his Lance Landers-owned Longhorn machine. “I could run through the middle about as good as I ever had. I just carried a lot of momentum.

“I knew the top was pretty good down in (turns) one and two, but I knew there’s also rocks here, so you always take that gamble (running the top). I had to go up there a couple times in lapped traffic to get by a few. It worked out we didn’t have a flat.”

The only moment in the feature that caused Davenport any significant consternation was when he was greeted by a caution flag rather the checkered flag. As he headed off turn four to complete what would have been the 50th circuit, the yellow lights blinked on because 11th-place Jimmy Owens of Newport, Tenn., had stopped in turn one with a flat right-rear tire.

“I felt like I won this race coming to the checkered there … it is what it is,” Davenport said with a smirk. “And then coming back around (for the final restart) they (officials) said (on the one-way radio) they was gonna throw the white and checkered together, and I didn’t know if (the starter) didn’t have it out in time, but there wasn’t nothing (displayed) when I come by (for lap 50), so I was like, ‘Oh, crap. I didn’t know if it was the white or the checkered.’ So I went ahead and made an extra lap.”

Davenport handled the race’s conclusion with aplomb. He knew the fleet Overton was looming in second, but Overton’s presence had no effect on him.

“After that caution come out, the first one (on lap 44), he rolled up beside me I guess just to say hello or whatever,” Davenport said of Overton. “He’s been awful tough this year, no doubt. It’s been amazing what he’s been able to accomplish, but we changed some things on the car this week and I’ll tell you what, I feel as good as I ever have.”

Overton admitted he had nothing for Davenport. He showed some feistiness when he ran the outside past McCreadie for third on lap 28 and Madden for second two circuits later, but he didn’t have enough speed in his David Wells-owned Longhorn mount to deal with the leader.

“We’ll take our second place,” said Overton, who was seeking his first-ever Dixie Shootout victory. “I knew something was wrong; (the car) was laying really bad. I was worried I was gonna get a flat and blow the whole deck out.”

Nevertheless, Overton asserted that “J.D. just got out there and got out front and didn’t mess up. That’s all it took.”

Davenport’s seventh Lucas Oil Series triumph of 2021 but first since July 17 at Lucas Oil Speedway in Wheatland, Mo. — a span of 19 races — came without the presence of his crew chief, Jason Durham, who remained at his home in Glasgow, Ky., making a slow recovery from Covid-19.

“We worked at my house (in Pelzer, S.C.) this week,” said Davenport, whose equipment is normally prepared at Durham’s shop. “That’s the first time I’ve ever had a race car at my house, or my shop, so it’s kind of cool to come out here and set fast time, win the heat and win the feature at a place I’ve never won at.

“To be honest, when I was racing back home (at the start of his career), with just me and my dad, we was almost scared to come here because the competition was so good and it was so hard to win here. So we just stayed up in the north Georgia mountains and into Tennessee.

“This place is tough,” he added. “I’ve come close here several times (notably runner-up finishes in the 2012 and ’18 Dixie Shootouts), but I ain’t ever had a race car like I had to night.”

The race was slowed by four caution flags. The first came on lap seven when Scott Bloomquist slowed while running seventh due to broken rearend gears. Matt Cosner spun off turn four on lap 44 to end the feature’s longest stretch of uninterrupted racing, then eighth-place Austin Horton slowed with a flat right-rear tire on lap 46 and Owens stopped on lap 49 to slow the race a final time.

Notes: Davenport’s victory was his 22nd overall of 2021 and the 57th of his career on the Lucas Oil Series. … Davenport was joined at the race by his young son, Blane, as well as his father and two brothers. … Madden said his right-rear tire went away during the race’s late stages. … Two-time Dixie Shootout winner Michael Page made the race’s biggest charge, advancing from the 19th starting spot to finish sixth. … Cody Overton, Brandon’s younger brother, qualified for the feature driving a team car fielded by Floridian Jeff Mathews.