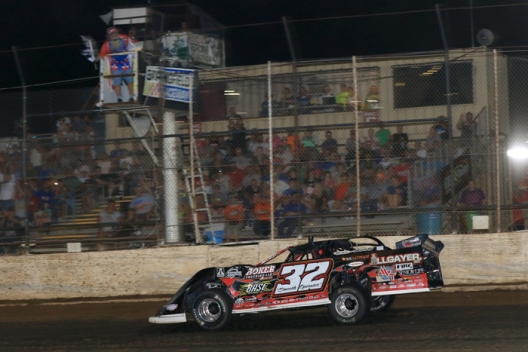 SPRINGFIELD, Mo. — Ashton Winger made a bid for his third consecutive DIRTcar Summer Nationals victory, but Bobby Pierce was having none of it.

Pierce, the 24-year-old Oakwood, Ill., driver and series points leader, kept the fifth-starting Winger in check over the last half of Thursday's 40-lapper at Springfield Raceway and picked up $5,000 for his series-leading ninth victory of the season.

Winger, a two-time winner last week at Thunderbird Raceway in Muskegon, Mich., and Oakshade Raceway in Wauseon, Ohio, jumped into second on a mid-race restart and chased Pierce the rest of the way. He closed within seven-tenths of a second with eight laps remaining, but Pierce beat him through lapped traffic to stretch his lead at the finish, then pulled away on a final restart to win by 1.810 seconds at the quarter-mile oval in southwest Missouri.

Scott Crigler of Alton, Mo., made it a three-way battle for the lead on the lap-21 restart before settling for third while Joe Godsey of Edinburgh, Ind., and Tim Lance of Brimfield, Ill., rounded out the top five.

Polesitter Tony Jackson Jr. of Lebanon, Mo., led the first 13 laps, but just as he was feeling pressure from Pierce through turns one and two, Jackson's left-rear tire shredded and he made a quick trip to the pits for fresh rubber. He rallied back to 11th but retired on lap 31.

The feature was slowed by four cautions, the first for Jackson's lap-14 flat and then when the starting cone was knocked onto the track on the 16th lap. The third caution flew on the 21st lap when Jeff Roth went around on the backstretch after several cars bottled up (Terry Phillips retired during the caution with a flat tire).

The final caution appeared on the 36th lap when fifth-running Tanner English slowed in turns one and two with a flat tire.

The series return to Tri-City Speedway in Granite City, Ill., on Friday for a $10,000-to-win event, filling a date vacated by Lake Ozark Speedway in Eldon, Mo. Tri-City will become just the second track ever to host non-consecutive series races in the same season after Fairbury (Ill.) Speedway last season.

Notes: Pierce's 36th series victory breaks a tie with Brian Shirley for the fourth most victories in tour history. ... Last year's race winner Frank Heckenast Jr. wasn't in attendance; he's competing in Lucas Oil Late Model Dirt Series action at I-80 Speedway in Greenwood, Neb. ... The Springfield facility has seen several improvements since last year's Summer Nationals visit, including a 10-position scoreboard in turn two, LED track lighting and a flattened infield covered with 1,240 tons of base rock (the infield formerly had ramps and berms for motorcycles or ATVs). ... The improvements were done in part for concerts that promoter Jerry Hoffman is hosting, including Aug. 21's event featuring Cody Johnson. Between the infield and the stands the track can host 7,000 for concerts. ... Hoffman planted Kentucky Bluegrass in the infield in hopes of having a lush green surface, but he couldn't get the grass to grow. ... The track's provisional was given to the driver making the furthest trip to Springfield: Thomas Hunziker of Bend, Ore.

Tony Jackson Jr. will start on the pole of the 40-lap feature after the redraw among heat winners. Series points leader Bobby Pierce will start second and Scott Crigler third. ... Tim Lance Jr. was upside down for the second on the series when he rolled entering the third turn. The No. 148 landed on its wheels with rescue officials reaching the car immediately reporting him as OK on the seventh lap of the third heat. Lance also got upside down at Beaver Dam (Wis.) Raceway. ... Kyle Beard was running second in the second heat when he shredded a tire and fell out prelim. ... Also in the second heat, Shannon Phillips went up in smoke and departed. ... Jacob Magee of Caney, Kan., scratched from time trials with transmission problems and was done for the night. ... Justin Wells of Aurora, Mo., among the promoters of the Dirt Track Bank Cash Money Super Dirt Series, entered Springfield's action in a John Muilenberg-owned No. 49 car. He finished fourth in the third heat, benefitting partly from a turn-two tangle between Tim Lance Sr. and Mitch McGrath that sent McGrath spinning. ... Wells drove his No. 98 TNT Race Car to a $2,502 victory on Sunday at Double-X Speedway in California, Mo., in the third annual Jason Russell Memorial. ... Steve Stultz of Peoria, Ariz., held the third spot most of the third heat, but a deflating left-rear tire dropped him back to fifth on the final lap.