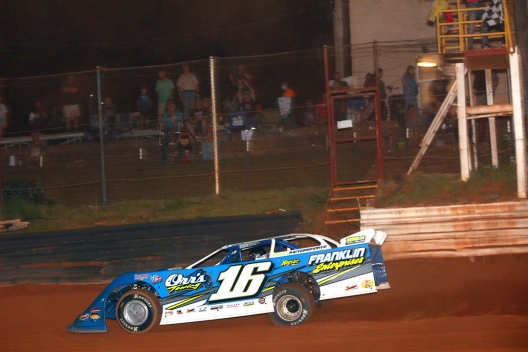 Hornton, who controlled all 40 laps, held a 1.187-second advantage when the yellow waved for Franklin, N.C.’s Chuck Southard on lap 37. On the restart he quickly eased away and went on to win by 1.775 seconds ahead of second-starting Dixon, earning $4,053 for his third career Southern Nationals triumph and 10th overall victory of 2021.

Floridian Mark Whitener briefly broke up the home-state drivers’ stranglehold by climbing into the top five midway through the 40-lap feature, but the Middleburg native faded back to finish sixth after starting 10th.

Horton was never seriously threatened, despite a bevy of cautions that stole his momentum in the early going.

The race was slowed by four yellows, with three breaking up the action in the first seven circuits. Jordy Nipper of Gray, Ga., was responsible for the first two cautions — he had a flat left front tire on lap two and he spun on lap five — while Dale McDowell of Chickamauga, Ga., the tour’s winner on Tuesday at I-75 Raceway in Sweetwater, Tenn., slowed with a right front flat on lap seven to draw a caution.

But each time, Horton was able to pull away with ease.

“It feels great (to win at West Georgia). I made my first laps here,” Horton said. “I cut my teeth here in a street stock. We came a long ways in a short time. Man, I don't even know what to say … just glad to do it at the hometown track and get us another win. After a rough hot laps, it couldn’t have went any better after that.”

Though it took a while for drivers to get settled in, the race went 30 caution-free laps until Southard’s machine pulled up lame with just three laps remaining. There was a brief red-flag during the final stoppage as well as a fan in the grandstands was apparently hit with a rock and needed medical attention. The red flag — which lasted about 4 minutes — did little to slow down Hornton, however, as the local standout had little trouble on the restart.

Horton said as long has he didn’t get in a hurry, he knew his lead was growing.

Unlike Horton, who has turned many laps at West Georgia, Dixon was learning on the fly. He chased Horton throughout after starting alongside on the front row, but never managed to make a bid for the lead.

“Austin, he did a really good job,” said Dixon. “This is his home. This is the first time I've ever seen the place, so I’m really happy to run second to him, so no complaints there. The car was really pretty good, but we were too loose. We had a second-place car. I picked up a tire chatter with about 10 or 15 laps to go and I don't really know what that was about. We got to figure that out. I might have been a little bit too hard on that right rear (tire) and blistered it. But for first time out here and never to see the place before, we're pretty happy with it.”

Considering he’s only ran a handful of time this season, Williams was pretty happy as well. He said he worked so hard to get a podium finish, he may need to give his engine builder a call.

“I’ve got to call Jay Dickens after the race and tell him the (engine’s connecting) rods are alright because I set (the RPMs) on the chip for about two laps trying to get to third,” said Williams. “I just can't thank everyone enough man. We work a full-time job and my daddy let me off work to come down here.”

Notes: Horton’s 10 victories this season have been spread among three divisions. It was his third Super Late Model win of the year and his second with regional series after collecting a Southern All Stars win on July 4 at Sugar Creek Raceway in Blue Ridge, Ga. He also has four Limited Late Model wins and three Crate Late Model wins. … Horton’s previous Southern Nationals wins came in 2018 and 2019, both at Rome (Ga.) Speedway. … Thirteen of the 24 starters completed 40 laps. … Dale McDowell struggled to an 18th-place finish after winning on Tuesday.