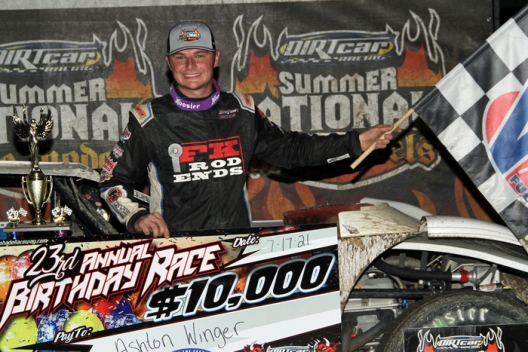 WAUSEON, Ohio — Drivers who struggled through tough times can certainly appreciate the good times. And Ashton Winger of Hampton, Ga., is soaking up some good times on the DIRTcar Summer Nationals.

Winger overtook Jeep Van Wormer on the 22nd lap Saturday at Oakshade Raceway and dominated the rest of Saturday's 50-lap Birthday Race for his second consecutive victory on the DIRTcar Summer Nationals.

The driver who had a single victory entering the scheduled 36-race tour has suddenly won three of the last seven tour events, outpacing series points leader Bobby Pierce of Oakwood, Ill., in each one while turning his season around.

"I'm blessed. I'm 21 years old and get to race and do what I love. I'm super thankful," Winger said in victory lane, repeating his mantra. "We've had a bad luck this year and hard times, and it's starting to come around."

On a night when a season-high 53 Late Models packed the pits, Winger was the class of the field in taking the checkers 2.803 seconds ahead of Pierce. Pole-starting Tanner English of Benton, Ky., was third with 13th-starting Rusty Schlenk of McClure, Ohio, and Pinconning, Mich.'s Van Wormer — who slipped back to eighth after a lap-29 miscue but rallied back — rounding out the top five finishers.

Dona Marcoullier of Houghton Lake, Mich., led early from outside the front row before Van Wormer took command on a lap-nine restart with Winger sliding in front of Marcoullier, who was shuffled back to fourth.

Van Wormer paced the field 12 laps, but he got too high in turn four and Winger zipped past on the 22nd lap to grab a lead he'd never give up on a racetrack that provided a rugged challenge, especially in turns one and two after recent rains soaked the surface.

"I don't know, the racetrack's just rough and had a lot of character on one end, then on the other, it was kind of more my deal, the slick," Winger said. "Man, this is badass. This race car was fun to drive. I really, I wasn't sure (about winning because) I knew Tanner would be tough and Dona would be tough. I'm glad everything worked out the way it did."

Pierce "would show me a nose on those restarts," Winger said, but the winner continually pulled away and wasn't seriously challenged in the final laps.

"This is awesome," Winger said. "I'm thankful and hopefully we can keep riding this wave."

Pierce and English acknowledged they simply didn't have the cars to keep up with the winner at the 3/8-mile oval, which hosted the series for the 25th time.

"He was really good. He had a great car. He was able to get off the corner way better than anybody," Pierce said. "I just (couldn't make up ground) except for turn four where it started latching down.

"I lost power steering with 10 laps to go, I think, just from the rough track. Bouncing through the holes seemed to be the quickest way in turn one, so once the top got finally got (too far around) I had to run through the holes. I'm just glad everything stayed together."

English, who lost the second spot on the second lap and never ran that high again, couldn't find a way to make his car any better.

"I've been telling people, you know, I guarantee us three could go somewhere right now with a load of competition and do the same thing. I know when I'm on my game and I'm sure they're on their game."

J.R. Gentry spun on the inside of turn two on the ninth lap and a lap-27 yellow fell when Gentry slowed with left-rear body damage after contact with the second-running Van Wormer.

The series takes a lengthy break before returning to action Thursday at Springfield (Mo.) Raceway, the first of five races in five nights in three states, including the first-ever tour trips to Kentucky's Richmond Raceway and Lake Cumberland Speedway.

Notes: Winger dedicated the victory to a family friend, Jesse Barton, who died recently. "He was riding with us tonight, so I'm thankful for that," Winger said. ... Casey Noonan of Sylvania, Ohio, started 12th and ran as high as fourth on lap 37 before settling for seventh. ... Ten of 25 starters completed 50 laps.

Tanner English drew the pole for the 50-lap feature. English, a winner at Tri-City Speedway in Granite City, Ill., this season, has two career series wins and trailed series leader Bobby Pierce by 110 points entering the event. … While fourth-starting Chris Keller is looking for a repeat of his 2019 Birthday Race finale at Oakshade — it would be just his second career Summer Nationals triumph — at the other end of the spectrum is fifth-starting Pierce, who is chasing his 36th career Summer Nationals win. … A Pierce victory would put him in sole possession of fourth on the tour’s all-time win list, surpassing Brian Shirley of Chatham, Ill., who is skipping his third series race of the season. … Ashton Winger, the tour’s most recent winner on Thursday at Michigan’s Thunderbird Raceway, has two career Summer Nationals wins, both this season. The lone Georgian to even win a Summer Nationals race, Winger has proven quick to adapt to tracks that are new to him. He’ll start third in the main event. … Sixth-starting Jeep Van Wormer is currently ninth on the series win list with 15 career tour wins. Van Wormer finished sixth in the 2019 Oakshade Summer Nationals finale. … Seeking his second career Summer Nationals win, Dona Marcoullier will start alongside English on the front row. Marcoullier’s lone series win came on Aug. 21, 2020 at Tri-City Motor Speedway in Auburn, Mich. … Joe Godsey of Edinburgh, Ind., who qualified 13th in the first group is the lowest qualifying driver to race his way into the feature. Godsey starts seventh after finishing second in the first heat. ... After his trouble in the first heat Jon Henry ran a flawless B-main to gain entry into the feature. ... Provisionals went to Jeff Roth, Steve Kester, Colin Shipley, Dusty Moore and Brandon Lance.

Dona Marcoullier of Houghton Lake, Mich., inherited the victory in the first heat when race-long leader Jon Henry of Ada, Ohio, lost his left rear wheel exiting turn four on the final lap. Henry, who dominated the race for more than nine laps until his misfortune, limped his No. 57 across the finish in fourth, one spot shy of transferring. Henry said he had no warning that disaster was about to strike. “It just snapped. I sheared the studs off (the hub). There wasn’t a vibration,” Henry said. … “I just hope we can survive. I ‘bout ate it out there … swallowed my tongue and everything,” said sixth heat winner Tanner English of Benton, Ky. “It’s pretty rough out there. I just stayed on the bottom, but I felt slow. Hopefully we can stay on the bottom (in the feature) and be a little faster than those other guys and we can stay up front.” English bounced hard through turns one and two on the opening lap, but it could have been worse. After his qualifying lap he folded the nose under on his Riggs Motorsports Rocket. “After I qualified I hit a little bump … well, it wasn’t a little bump … and folded the whole bumper under,” English said. … Every heat winner made note of the rough conditions. … “There’s a bunch a holes out here,” said Pinconning, Mich.’s Jeep Van Wormer after winning his second heat race in as many series events. “I’m sure with all the rain they did the best that they could, but 50 laps is gonna be trying. Fifty laps is gonna be a lot of laps on these cars and trying to keep it under control the whole time.” … Ashton Winger of Hamton, Ga., started on the outside front row of the third heat. He hits holes in turns one and two, upsetting his car and allowing Devin Shiels of Britton, Mich., to briefly pull ahead. “It’s just the nature of the racetrack. Unfortunately the grip is where the holes are,” said Winger after rallying to win the heat. … Series leader Bobby Pierce of Oakwood, Ill., said his team would need to do a thorough bolt check before the feature. “It’s super rough out there,” Pierce said after winning the third heat. “I saw that first heat and what happened to (Jon) Henry there. We don’t want anything like that happening.” … Despite winning the fifth heat comfortably, Chris Keller of Adrian, Mich., said his brand new Swartz car is “a little off.” Keller topped J.R. Gentry in his heat by about 3 seconds, proving his victory in the 2019 Birthday Race finale — the last time the DIRTcar Summer Nationals visited Oakshade — was no fluke. … Jacob VanDeVoorde of Stryker, Ohio was light at the scales after putting up the 12th fastest time in his group. VanDeVoorde would have started fourth in the third heat, but instead was relegated to last. VanDeVoorde was on the move in the heat until he jumped the cushion, folded the nose of his car under and tagged the wall, damaging the right rear.