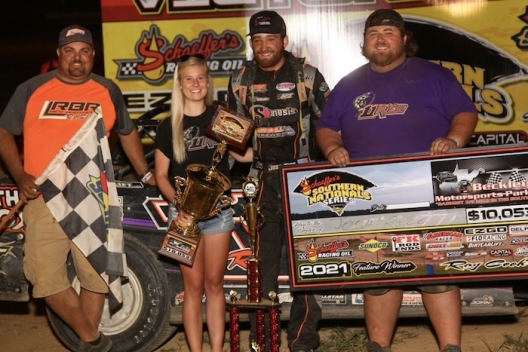 BECKLEY, W.Va. (July 16) — Josh Rice had never been to Beckley Motorsports Park before entering the track’s Schaeffer's Southern Nationals series opener on Friday, but the cushion-pounding racer from Verona, Ky., had seen enough videos from the high-banked 3/8-mile track to know he would probably run well there.

“I watched a lot of videos of here and seen how good the cushion was, and I was like, ‘this looks like my cup of tea,’ “ Rice said after Friday’s 53-lap Southern Nationals feature at Beckley.

Indeed, Beckley was just to Rice’s liking. Starting from the fifth spot, Rice expertly navigated the track’s treacherous cushion to climb to second mid-way through the race and had ran down leader Devin Moran before both of Moran’s right-side tires went flat during a caution with 39 laps complete.

Inheriting the lead for the ensuing restart, Rice cruised through the final 14 laps on his way to claiming a $10,053 victory in the opening round of the 12-race Southern Nationals tour. Zack Dohm of Cross Lanes, W.Va., advanced from his 12th-starting spot to finish second, while early-leader Jacob Hawkins of Fairmont, W.Va., slid back to third after mid-race contact with Rice caused heavy damage to the left-front of his car.

Rice’s first ever Southern Nationals victory came by 1.529 seconds over Dohm, who has dominated Beckley in recent season, including a $20,000 victory in the track’s unsanctioned Beckley USA 100 on July 4.

“I gotta give a big shoutout to Zack Dohm. He kicks ass here and to come here and out run him is really cool,” Rice said. “I think a lot of Zack. This is a really good finish.”

Dohm, who had to start from the tail of a heat race after a faulty fuel pump forced him to miss qualifying, was happy to salvage solid finish after his setback early in the night. He would’ve liked to have challenged for the lead late in the race, but Rice was simply too good on the high side.

“My car was pretty good, but I don’t think anybody was going to run with Josh Rice on a cushion like that,” said Dohm, who has earned most of his many wins at Beckley riding the low groove much like hid did in Friday’s race. “I’m sure Jake (Hawkins) was running up there too before his left-front got killed. But that ain’t my style. We did the best we could. That was probably about the best we were going to do anyways with the cards we were dealt.”

The contact from Rice that left Hawkins left-front damaged was the only mishap in Rice’s run. That tangle came on lap 23 when Rice had a strong run on Hawkins for the third spot exiting turn four. When the low-running Hawkins drifted into Rice’s outside lane on the front straightaway, Rice ducked underneath Hawkins and attempted a low-side pass entering turn one that came up short.

“I hate how that happened, but I was just so much faster it was time to go,” Rice said of his tangle with Hawkins. “I just wanted him to know I was there. I could’ve rammed him at the flagstand, but I was trying to just cut in front of him so he knew I was there and I got all squirrelly and it was too late. There was nothing I could do.”

Hawkins, who led the race’s first seven laps from the outside pole, wasn’t pleased with the outcome.

“The car was good again, but when you race with idiots like that Josh Rice there’s not much you can do about it. The last couple of times we’ve been here we just get used up,” Hawkins said. “We’ll get it back together and put that in the memory bank and make sure we park him next time.”

Hawkins and Moran weren’t the only contenders to run into trouble. Ross Bailes of Clover, S.C., saw his chances at a win go awry when he suffered a flat tire under a lap-38 caution. Bailes, who led laps seven though 24 before giving up the lead to Moran was running third before heading to the pits. He suffered another flat with four laps reaming and ended up ninth at the finish.

Notes: The race was slowed by six cautions and took 52 minutes to complete. … Eleven of the race’s 22 starters were running at the finish; all of them were on the lead lap. … The race’s first caution appeared with just one lap completed when fourth-starting Dale McDowell slowed exiting turn two. The Chickamauga, Ga., driver left the track under the caution and didn’t return.